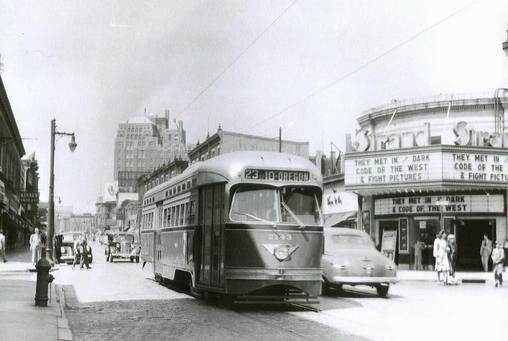 This Strand Theatre (not to be confused with the smaller Strand Theatre on Girard Avenue), was opened on January 1, 1917 with Clara Kimball Young in “The Foolish Virgin”. Organist Henry Spiller opened the Moller 2 manual organ. The Strand Theatre was closed by Warner Bros. Circuit Management Corp. on July 31, 1960 with Curt Jurgens in “Michael Strogoff” & John Ericson in “Pretty Boy Floyd”.

The Strand Theatre was demolished in August 1960 and the site became a parking lot.

Here is another 1916 reference to a theater to be built at this intersection, this from the April 1 issue of Motography:

Are we sure that the Strand’s opening year was 1914?

Joe; We now have a bit of a mystery here, as in Irvin R. Glazer’s book ‘Philadelphia Theaters’ published in 1994 by Dover Press, the Stratford Theatre is listed as opening in 1913, located at 1443 S. Seventh. He lists the Strand Theatre located at 3601 Germantown as opening in 1914 with Carl Berger as architect.

Engineering News might simply have gotten the name of this house wrong, or the owners or lessees of the theater might have decided before it opened to call it the Strand instead. Any maybe it did open as the Stratford. Our page for the Stratford on 7th Street says that it opened in 1913 as the Becker Theater, but doesn’t give a date for the name change.

But the existence of both the April item about plans for a theater and the September item about construction of a theater, both noting Ketcham & McQuade as builders, one noting the Hoffman company as the designers, make it clear that a big theater was being built at this intersection in 1916. Maybe the Strand was an expansion of or a replacement for a smaller theater that had opened in 1914, or maybe Glazer just got the opening year wrong.

This Strand Theatre, on the corner of Germantown Avenue and W. Venango Street was designed by Philadelphia architect Carl P. Berger, AIA (1873-1947) and opened in 1914 — not 1917. Alterations were made to the theater in 1916 by William H. Hoffman ( ? -1925) of the Philadelphia architectural firm of Hoffman & Co. It was redecorated in 1924. The Strand Theatre was demolished in 1971 after a devasting fire. The site is now a PPA Municipal Parking Lot and a location for Enterprise CarShare.

A discrepancy exists on what the seating capacity was for the Strand. PAB says the theater seated 1,679 while Cinema Treasures says 1,641. This could have resulted during the 1916 alterations. If anyone has an answer, please share, and thanks!

Today’s Phillyhistory site shows the Strand Movie (before shots, demolition supposedly inevitable) on 8/29/1960. On the historicaerials.com website, by 1967 the site is clearly a parking lot. Was 1971 an incorrect date for demolition of this theater?

According to the website phillyhistory.org, which is the City of Philadelphia official department of records website, pictures showing demolition of the Strand, Germantown Ave and Venango Street were taken in February 1961.

December 31st, 1916 grand opening ad in the photo section. It opened on the 1st.

The Strand was a Moorish new-build, $250,000 structure built in 1916 by Ketcham & McQuade. The project was first announced in December of 1914 when Jennie E. Effinger acquired this property at the confluence of Germantown Avenue and West Venango Street. Plans were initially drawn by Carl P. Berger but rejected and the project languished in 1915. The Strand concept was rekindled when Hoffman-Henon architectural plans referenced above were approved and the construction team worked much of 1916 on the building.

The Strand’s grand opening scheduled for Christmas Eve on 1916 was pushed back when the theatre wasn’t quite ready. Jennie and son, Herbert Effinger, of the Leader Theatre opened the Strand on January 1, 1917 with Clara Kimball Young in “The Foolish Virgin.” Henry Spiller was at the Kimball organ with Professor Jacob Friedman directing the 18-piece orchestra. Simplex projectors shone upon the Rembusch gold fiber screen. Seat count decreased when the boxes were discontinued. The Strand was decorated by Barbarita of Pittsburgh. (References to a Strand Theatre on this property prior to 1916/7 and in the 1961-1971 period are in error.)

Stanley Warner circuit took over the Strand. Sound was added to keep the movie house viable. Ads are discontinued by Warner following the July 31, 1960 double-feature of “Michael Strogoff” and “Pretty Boy Floyd” at end of lease. The building was demolished beginning the next month for a parking facility. (There is a story about a Strand Theatre fire in February of 1961 in the local paper that took place in Connecticut. I see no coverage of any fire at the Philadelphia Strand and would doubt that such a fire would go uncovered by the local paper.)