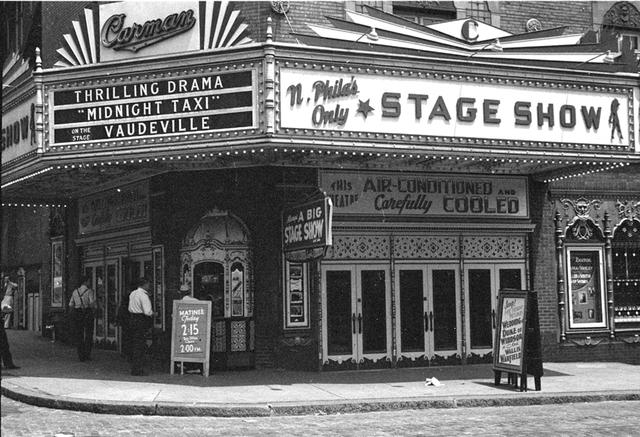 The 2.500-seat Carman Theatre opened January 1, 1928 with Virginia Valli in “Ladies Must Dress” on the screen plus stage presentations. The architect was William E. Groben, who also designed the Oxford Theatre in Philadelphia, and redesigned the Hiway Theatre in Jenkintown, Pennsylvania, in the 1930’s. The Carman Theatre was equipped with a Gottfried 4 manual 15 ranks organ.

The Carman Theatre was razed in 1978.

in the mid 70’s the carmen was used to store trucks. at that time i was buying used auto parts ,and i had a chance to explore the old theater. there was an garage door busted thru into the side of the theater for truck access.all the seats were gone. the wrought-iron railings and balustades were disasembled and lay in piles. in an upstairs room piles of old papers littered the floor. i dug out a few old carmen payroll receits for the late 40’s and early 50’s. i still have two of them hand signed by stubby kaye (he made $275.00 for that week, – tax and commision)and one signed by the manager of the original amature co. i later want back to look for more interesting papers ,but they were all gone. it had all been cleaned up and trashed!! one can only wonder what was lost
i also still own two small decorative pieces of the ballasrade-railing that once surrounded the orchestra pit and other areas of the theater. these artifacts are available for sale if anyone is interested

Here is an expanded version of one of the PAB thumbnails posted by LM on 11/30/04. The photo is from the Irvin Glazer collection:
http://tinyurl.com/yso9f6

31 Aug 1940 Box Office mentioned a screening at this theater of “The Howards of Virginia” with in person appearing the Director, Frank Lloyd & star Martha Scott

Here is a 1961 photo. The theater was closed at that time.
http://tinyurl.com/qkgtqb

My grandfather, Sylvan Katz, was the manager of the Carman in the 20’s-40’s.

My husband’s great grandfather, William Carman, built the galard and carman theatres. His grandfather, George Graves, owned and ran the carman from 1928 til 1945. My husband never saw it in person..would love to see interior pictures.

My name is Ken Carman. My grandfather Walt Carman along with his two brothers were born and raised in Phila.. I don’t know much about his ancestry. I was always told his father was a banker in Phila. during he depression he committed suicide. I was hoping someone can tell me if I could be related to William Carman? My grandfather never spoke to us or my father of his ancestry or were he grew up in Phila. Please write me back if any one has any info. or needs more information. Thank You Ken Carman!

page of articles and ads at https://philly.newspapers.com/clip/6923609/carmen_theatre_opening/

The address of the Carman Theatre for its first 20-year sublease was listed as 3221-3231 Germantown Avenue. The 2,500 seat theatre struggled in the television age where - on its second 20-year sublease it was listed at 3221–3229 Germantown. It appears to have closed with a 94 cent bargain priced double feature of “You’re Never Too Young” and “Great Missouri Raid.“ It was auctioned off at the end of its second 20-year leasing period in 1968 bringing just $40,000. Its upper floor was used for retail and was demolished just after its 50th anniversary in 1978.