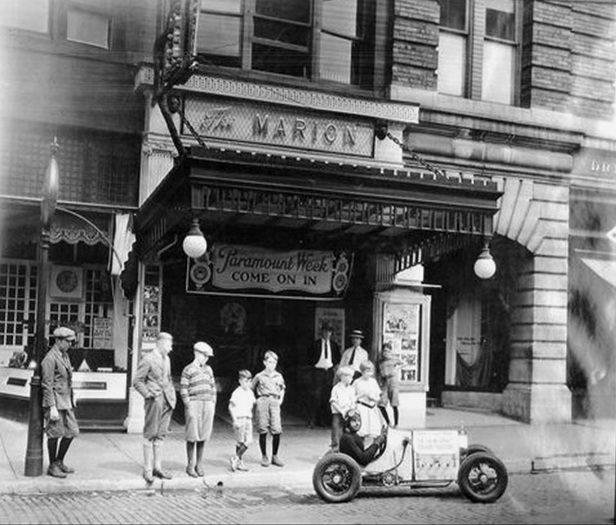 The Marion Theatre opened October 20, 1914 and was considered the top cinema in town until being overshadowed by the larger and grander Palace Theatre.

But the Marion Theatre retained its first-run status and was handsomely modernized in 1938. It was closed in 1955 and was demolished in the 1970’s.

Status: The Marion Theatre has been closed for at least 30 or 40 years. The building stood as was for many years until Carrols Jewelery (located in the same building)remodeled the front lobby into part of their store. The theatre was located behind the store fronts across the back of the building. Sometime in the late 70’s or early 80’s the auditorium was torn down and used for off street parking. Sometime in the 2000’s the Uhlers building next door had a fire on one of the floor above the theatre and burnt the entire building where the theatre and Carrols Jewelers were located to the ground.

The October 16, 1915, issue of The Marion Star had an advertisement saying that the Marion Theatre would be celebrating its first anniversary that week.

Architected by J. Lewis Ellis, the Marion was opened Oct. 20, 1914 with 700 seats. Its first film was, “My Official Wife.” The Marion Photo-Play Company was in charge. The Photo-Play Company got in financial difficulty in October of 1928 closing the Marion as the theater went into receivership. Its closing was just for ten days as there was a larger deal coming to get the theater in the hands of Paramount / Famous Players which operated the theater from 1929 to 1932. Not surprisingly, the theater would host “Paramount Week.” But the theater closed and was re-opened before being sold to Mid-Ohio Theaters Circuit. The Marion was surging in 1952 at 5,000 customers a week. But attendance would plummet in 1953 and – just three years after its high flying days – it would close for good in 1955. The nearby State Theater closed two years later.