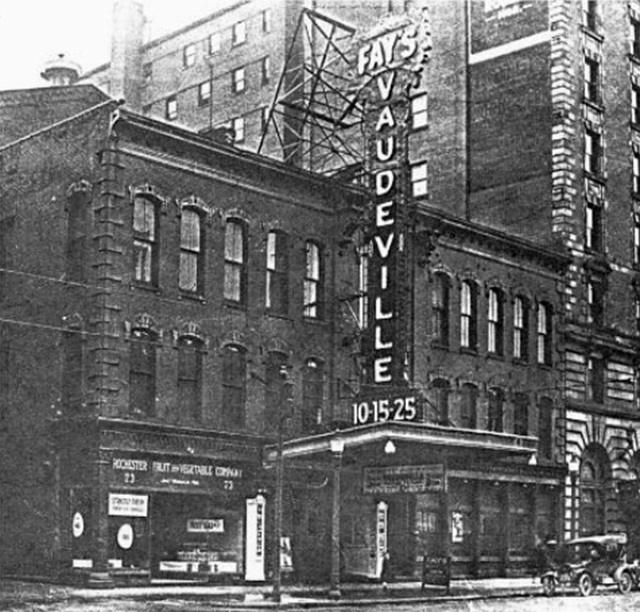 Opened as the National Theatre December 22, 1902. it became the Shubert Theatre prior to 1913. It went through several name changes and became Fay’s Vaudeville Theatre in 1916. By 1918 it was a 1st-run movie theatre named Fays Theatre. On October 20, 1930 it was renamed Capitol Theatre. During the 1940’s, as I remember it, the name on the early-20th Century marquee read “Comerford’s Capitol”. I have fond memories of going there often as a child with my parents. The Capitol Theatre was closed on December 31, 1979. It was demolished in 1980.

The links don’t seem to work. Could someone please update so the pictures were available again? Thanks.

Worked at the Capitol from 1964 to 1967, first as an usher then the Manager. Theatre was owned by the Fenyvessy Family who previously had owned about eight theatres in the heydey of movies including the Strand. The theatre was only opened on Saturday and Sunday and was the home of “Action Packed Proven Hits”. From 1965 to 1967 I booked the movies for the Capitol. the top grosser was “King Kong vs Godzilla”. The theatre was the first to show talking pictures. It started out as a vaudville house. The dressing rooms were in dismal shape, not having been used for over forty years.

Moose, I’d like to see some old pix and hear more stories. As a kid, I remeber seeing the outside of the thater and the marquee. I remember when they tore it down. Did it have the stadium seating there? King Kong Escapes as one of the features.

Hey everyone…I am new to “Cinema Treasures” but not unfamiliar with the Capitol Theatre. I have some fond and not so fond memories of the place…I do remember going there in the 60’s without the need for a parental unit…now days you can’t even send your child to the bathroom by themselves…I’ve been trying to locate several movies I saw there, but my title recall skills weren’t honed…I think one of the movies was “The Man in the Iron Mask” released in 1939? I’ve placed an order on Amazon for it, but it’s the other movie I haven’t seen anything remotely like it(remake of course)…for as much of the movie that I remember seeing ,from between my fingers…This man bought and won a lottery of sort, he died and was buried with the ticket in his pocket.His son dug him up and his face was disfigured just like his father’s face…Moose, anyone, that by chance, know the name of this movie plz, plz, plz contact me with that info…Thanks

Fay’s Theatre was in operation at least as early as 1918, when the May 4 issue of The Moving Picture World noted that Edward Fay had paid the First National Exchange in New York City $1,000 to secure a one-week run of the feature film My Four Years in Germany at Fay’s Theatre in Rochester.

Fay’s Theatre was mentioned in the June 21, 1924, issue of Exhibitor’s Trade Review, which said that E. M. Fay had begun a remodeling project after the lobby had been slightly damaged by a fire a few weeks earlier.

Edward Fay had a long career in movie exhibition, but most of his operations were in Providence, Rhode Island. The records of the Fay Theatre Company from 1928 to 1971 are held by the Rhode Island Historical Society. An inventory is here.

Rochester’s Downtown, by Donovan A. Shilling (Google Books preview) says that this house opened as the National Theatre on May 18, 1903. However, the January 3, 1903, issue of the Lockport Journal mentioned a play that had opened at the National on New Year’s Day. I don’t know if that means the house opened earlier, or if Rochester had an earlier theater of the same name.

The July 15, 1902, issue of The Plumbers' Trade Journal said that the construction contract for the National Theatre called for completion of the structure by October 1. If that goal was met, and assuming at least another month for outfitting and decorating, the National Theatre could have opened as early as November, 1902.

The magazine also noted that the National Theatre had been designed (not surprisingly) by Rochester’s own noted theater architects, Leon H. Lempert & Son.

This circa 1908 photo of Main Street shows that the National Theatre was fronted by a building that, judging from its architectural style, was probably built in the 1850s or 1860s. A new auditorium was most likely built behind the existing commercial building, though it’s also possible that the existing building was gutted and its interior rebuilt as a theater.

I can remember going to this theater in the early 70' to see a Kung-Fu triple feature with my two older brothers and one of their friends,Ya my mother had no idea. when I told her what movies they took me to see she was as they say “ Not a happy camper'..The movies were "The Street Fighter”, “Way Of The Dragon' and "Cleopatra Jones And The Casino Of Gold'..

According to “History of Rochester and Monroe County” by William Peck (1908), The National opened Dec. 22, 1902 on the site of the old Odd Fellow’s Hall. According to “Its Showtime in Rochester”, by Donavan Shilling, the theater became Fays in 1916. That same book poinbts out that the located to the left of the theater entrance (as seen in the first picture under this heading) is the Rochester Fruit and Vegetable Company, managed by John F. Wegman (as in Wegmans).

October 20th, 1930 grand opening ad as Capitol in photo section. It was opened by Comerford Theatres.

The National was renamed the Sam S. Shubert Theater in 1910, opening under that name in 1910. Sam S. Shubert was the late brother of Lee and J. J. Shubert, heads of the Shubert organization (Democrat and Chronicle 8/8/1910 p. 11). The theater was renamed the Avon Theater in 1916. The patrons of the theater were polled as to a preferred name change, and Avon was most popular, probably due to the Shakespeare revival in 1916, the 300th anniversary of Shakespeare’s death (Democrat & Chronicle 2/27/1916 p. 31).

The last pictures shown at the Capotol were “Iron Finger” and “Call Me Dragon”, two Kung Fu movies New Year’s Eve 1979, The theater was torn down for a parking lot shortly thereafter. (Democrat and Chronicle 3/10/1980 p. 1)