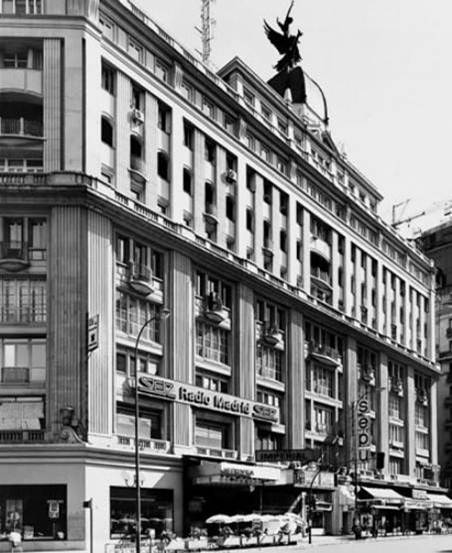 Built in 1923 and designed by architect Theodore Anasagasti as a department store named Los Grandes Almacens Madrid-Paris which was opened on 4th January 1924 by King Alfonso XII and Victoria Eugenia. In 1933, several spaces in the store was converted into a cinema which opened as the Cine Madrid-Paris on 20th April 1935 with “Musica y Mujeres” and “Aladino y la lampino maravillosa”. All 698 seats were on one floor. It was renamed the Cine Imperial on 17th May 1939 at the end of the Spanish Civil War.

The Cine Imperial had 740 seats in the early-1990’s. When I saw "Halloween H20" there in October, 1998, I counted 631 seats in 28 rows of 7 seats, aisle, 14 seats, aisle, 7 seats. I estimated that for ‘scope films the screen was 35 feet wide. Though unusual for Gran Via movie theaters, no curtain was used. The Cine Imperial was known for its excellent sound. I noted Dolby Digital THX surround sound.

During my visits to Madrid in the 1990’s, the niche at this theater was horror films. In April 2004, a two day festival "Film Fantasy & Horror Calle 13" was held.