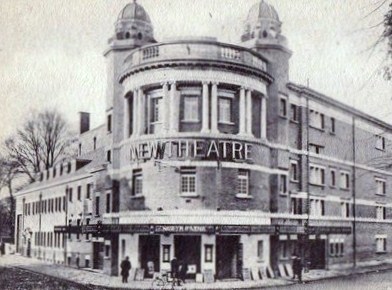 The New Theatre opened on 10th December 1906 with a production of William Shakespeare’s “Twelfth Night”. Seating for 1,570 was provided in orchestra, circle and balcony levels.

In 1931, alterations were made to allow for the theatre to show films and it became a cinema, with occasional music hall and live shows. In 1935, live theatre returned full-time under the direction of Prince Littler. During the 1970’s and 1980’s it played films on Sundays and also late night screenings on Fridays and Saturdays.

The theatre was closed in 1970 for refurbishment and a new stage was built in 1976. It went through an extensive refurbishment in 1988/89 that opened up the foyer area as it used to be just cramped corridors and stairs leading to the auditorium. Now it has a very spacious open plan foyer. The auditorium remains unchanged but still very beautiful.

The exterior is in brick and Bath stone on a very prominent corner site. Any major rebuilding or extension are impossible due to the theatre’s corner location in the very centre of the city.

The New Theatre is Cardiff’s number one touring venue. It was home to the Welsh National Opera for 40 years until it moved to the new Millenium Theatre in the docks area. All major touring musicals and plays have played the New Theatre, despite its very limited stage area, compared to other theatres.

The New Theatre is a Grade II Listed building.

There was a film season during the summer in the late 70’s, I’ll have to look up exact year. I remember seeing “The Sunshine Boys”, “Summer of 42” , “The Way we Were” and “Blazing Saddles” at the New.
The theatre’s web site is compiling a list of everything ever staged or screened.
In the early 1930’s the programme contained some “live” acts advertised as “Kit Cat Cabaret”. Details can be found in the local library newspaper archive.
Some details of the adaptation for projection equipment are available in the Record Office.

It is, I believe, some years since films have been shown at the New Theatre. Others may know whether any equipment survives but I suspect that Xenon lanterns and Dolby Sound were never installed.

In the 70s and early 80s they screened late shows of ‘The Exorcist’ many times on a Friday night. I remember the projection not be of the best quality.
I have a brochure here for the Winter Season 1977.
Showing from Dec 12th to 17th for ‘'A happy start to your Christmas entertainment’‘ –'The Sound Of Music’ Evenings at 7.30pm. Seats 70p (yes 70p!)
The brochure then goes on to advertise the Late Night Film Season for Jan/Feb 1978.
Jan 13th ‘Dance Of The Vampires'
Jan 20th 'Shaft'
Jan 27th 'Shampoo'
Feb 3rd 'Alice Doesn’t Live Here Any More'
Feb 10th 'The Mutations'
Feb 17th 'Thunderbolt And Lightfoot'
Feb 24th 'Hang 'Em High'
Mar 3rd 'Killer Of Killers'
SEATS FROM 60p! 11pm
All these wonderful movies mixed in with one night concerts from Tom O'Connor, Alvin Stardust,Hinge And Bracket and Pam Ayres.

Also another brochure from the Spring Season 1978 that continues from the season above with a change of program on the 24th Feb from ‘Hang 'Em High’ to a screening of ‘Lennie’!
Feb 24th ‘Lennie'
Mar 3rd 'Killer Of Killers
Mar 31st 'The Flesh And Blood Show’ and ‘The Magic Of Diamonds'
Apr 7th 'Virgin Witch'
Apr 14th 'The Creeping Flesh’ and “Ballad Of Bond Street'
Apr 21st ‘Kama Sutra’

Thanks Ian.
As I recall the screen wasn’t all that large because of the proscenium being “stage” size. Projection was from very high up, over what was then the “gallery” (hard seats with no backs) so possibly suffered from “keystoning”, and the sound was probably from a horn box wheeled onto the stage behind the screen.
Sherman Theatre and St. David’s Hall the other two “occasional” cinemas in the 70’s and 80’s could be added to more or less complete the coverage of the Cardiff area if you have any memorabilia.

I think i have some old Sherman stuff i can dig out.
You are 100% spot on about the sound being from horn box on stage. There used to be a dear old man on the stage door called Tom and he let me see it being set up for a late night screening after an evening live performance of ‘My Cousin Rachel’ starring Pat phoenix not long before she became ill. I saw the set up and then ran for my last train to Swansea. (am i showing my age here?)

The gallery was better known to all and sundry as “The Gods”. It had a separate entrance from the other auditorium areas which was obviously intended to prevent the local cheapskates from mixing with the quality.I can recall experiencing Shirley Bassey’s first return to Cardiff from the New Theatre Gods some time around 1958.It was a bit like sitting in a sardine tin for humans.

I did briefly once visit the box as a guest, pre 1960, whilst working as a Warner Pathe employee. If my memory serves me right (?) the projectors were old black BTH machines of pre Supa vintage. I was not much into projectors at that time but can confirm that I never saw similar machines anywhere else during my cinema career.

Some time around 1962 the Prince Littler management announced that they were closing the New Theatre and in due course all the staff duly lost their jobs.Many of them quickly found new employment in the other Cardiff cinemas and some with the BBC who had constructed a studio complex in an old chapel on the Broadway. The BBC decided that there was not enough room for the needed three studios at Broadway. The result was that they built a nearby third studio ©in what had once been the Stacey Hall Cinema in Stacey Road. This studio was used mainly for the Heddiw and Wales Today programmes. Jack Stediford, who for over 20 years had been the famed door man at the New Theatre found employment as doorman at this new TV studio.

During the intervals, when stage shows were being presented, the New Theatre always lowered a fire safety curtain in front of the stage area.This curtain was white with the word “Safety Curtain” written on it in black. Normal practice was then to project slides, via a slide lantern located in the box, advertising forth coming shows, the availability of refreshments and occasionally local traders. Dyers book shop nearly always had an advertisement shown. Some of the slides were professionally made and others were clearly home made. These homemade slides followed the local projectionists' tradition of coating a piece of glass with white shoe cream, letting it dry, and then scratching the message on the glass with a nail.

thanks editha and all the other great stories.