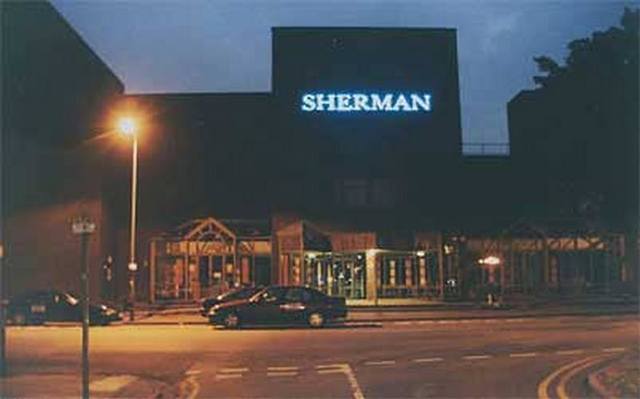 The Sherman Theatre opened in 1973 on the campus of University College, Cardiff, in the city centre. Films were occasionally shown at this well-designed theatre, associated with the University. At an open day it was found to have Philips projectors and a screen almost 32feet wide, giving an excellent standard of presentation.

Films (mainly late-night and vacation evenings) ceased some time ago.

Now a theatre only and soon to be substantially rebuilt and refurbished( in early 2010) as a result of a large Lottery grant.

I took that screen down with the venue crew in january 2008!

I was one of the original crew at the Sherman and worked there as projectionist and sound engineer from 1973 – 1974. The original installation consisted of a pair of Philips FP20 35mm projectors (mono optical only) and a Philips FP16 16mm projector (mono optical & mag). All fitted with Zennon arc lamps.

I returned to the Sherman in 1980 and finally left in 1989. During my second stint, we were able to acquire a couple of Stereo optical heads which we fitted to the projectors. Finances wouldn’t run to purchasing a Dolby stereo setup, so we built our own power supplies and pre-amps and fed the output into the theatre sound system giving three channels behind the screen and two at the rear of the auditorium. It gave a nice flat response, and good stereo imaging with rear channel when available and was an obvious improvement over the original system. But with no noise reduction of course. Still I seem to remember it cost us a fraction of the price of a full Dolby system. At one point we were hopeful of swapping the projectors for a pair of Philips DB70s Rank had in storage locally, but negotiations fell through. I suspect Rank didn’t want anyone to start showing 70mm in Cardiff. We also ran a newly restored copy of Napoleon which included the famous triptych last reel (early cinerama). This had been transferred in “cinemascope” format onto silent film. Unfortunately even though we opened the screen up to it’s fullest width, it still wasn’t wide enough so we had to reduce the picture height by using a different lens. Still pretty impressive. Sad it’s all gone now.