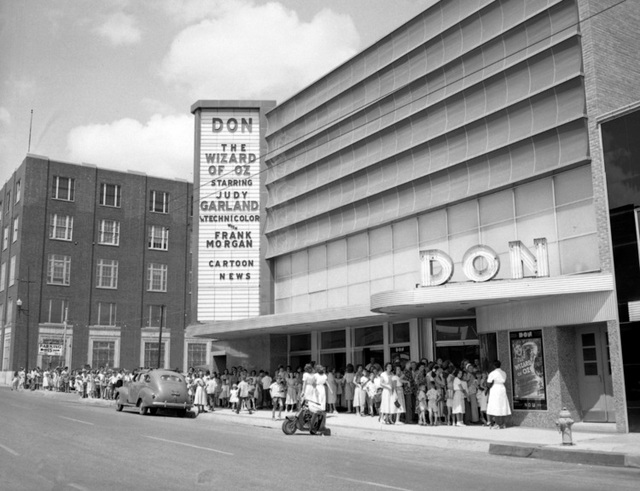 Opened July 9, 1947, the Don Theater was housed in a non-typical brick building that had an unusually modern look for its time period.

On the corner end was an attached vertical marquee that was at least two stories tall.

The entrance and outside box office were on the opposite end underneath the theater’s name which had been spelled out in large individual block letters.

Billy’s photo of the Don Theater.

It’s diffucult to read, but as best as I can make out from this newspaper article
www.flickr.com/photos/lastpictureshow/2184149247
The theater was built in the mid 1940’s by Don George. I think it had marble from Rome on the outside? It had nealy 1300 seats. Gulf State Theaters bought the theater in 1958. I think it closed in 1983? It sat empty for 3 years. It was diffucult to tear down and was torn down to make a parking lot.
Status needs to be changed to CLOSED/DEMOLISHED
Seats 1300

“Gee Dad, it was a WurliTzer!”

The Don Theatre was built in 1947. Boxoffice Magazine’s issue of December 6 that year featured an illustrated article about this strikingly modern house. The base of the facade was described as being faced with Minnesota cold water granite at the base, and the upper portion of the facade was of horizontally fluted blue porcelain, striped with aluminum.

The interior was rather severe, except for the leaf-pattern carpet used throughout the lobby and auditorium, but the auditorium had a stepped ceiling with coved lighting. The curved walls of the auditorium narrowed sharply toward the screen, and I would imagine that installing a full-sized CinemaScope screen would have necessitated removing a few front rows of seats in order to bring it far enough forward to accommodate its width. I don’t know if this was done or not, but the original proscenium would have been much too narrow to accommodate a proper wide screen.

The Don Theatre was the fifth house in the small circuit operated by Don George. According to Boxoffice it had 1,200 seats.

Boxoffice misspelled the names of the Don Theatre’s architects as Nield and Sobol once, and as Nield & Sombal once, but the correct name was Neild & Somdal. The successor firm, Somdal Associates, is now the oldest architecture firm in the state of Louisiana, founder Edward F. Neild having begun his practice in Shreveport in 1908.

Edward F. Neild, lead architect of the firm until his death in 1955, was one of the architects who worked on the reconstruction of the White House during the Truman administration, and was the lead architect for Truman’s Presidential Library, though he died before that project was completed.

It’s especially unfortunate that this theater has been demolished, as it might have been the only movie theater designed by this regionally important firm that was actually built. The Somdal Associates web site features a time line that shows a small drawing of a hotel and theater project planned for the Interstate Company, on a site on Lafayette Street in Baton Rouge, in 1931. Although the hotel was built, and is now called the Hotel King, I’ve been unable to confirm that the theater part of the project was ever completed.

To answer the final portion of the previous comment, the Hart Theatre in Baton Rouge did indeed form an L around the Hotel King. It was opened in 1941 and unfortunately it’s long gone, but the King has just been refurbished and reopened as the Hotel Indigo.

The Cinema Treasures page for the Hart Theatre says that it was opened in 1941, and was designed by architect J. T. Knight Jr., while Somdal Associates' timeline gives 1931 as the year they designed the hotel and theater project for Interstate. Given the ten year delay, the original plans must have been abandoned.

This opened on July 9th, 1947. Its grand opening ad can be found in the photo section.