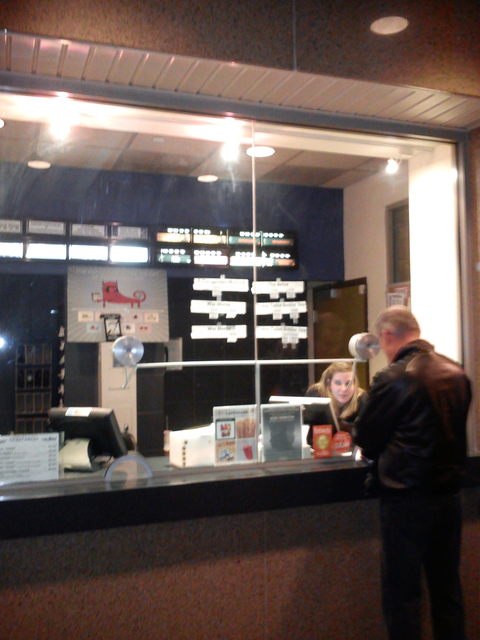 Landmark’s Bethesda Row Cinema is within walking distance of the Metro’s Red Line stop at Bethesda.

The underground theatre, decorated with pea green walls opened May 3, 2002 as part of a new 140,000 square foot, midrise building. A towering, vintage style vertical sign lights up the night. There are a total of 1,600 seats in its eight auditoriums.

This was the 54th theatre Landmark opened in the United States. The Washington Post reported on September 16, 2002 that the Bethesda Row Cinema was doing so well that it was getting more customers than anywhere else in the Landmark chain. In 2004, Landmark opened its second multiplex in the region, the E Street, in downtown Washington, DC.

If you like arthouse and independent films, the Bethesda Row Cinema is a welcome alternative to the Regal multiplex just around the corner. This is a great cinema and has great staff. This theatre is completely state of the art with stadium seating and wall to wall screens.

The Bethesda Row Cinema was closed for a month from March 29, 2013, for a remodel, which will include a bar.

A very nice art house cinema. While the sound and projection systems are hardly marvels, the modern architecture of the place helps the showmanship. The progressive (and I hate that term) concessions include some of the best popcorn in the area, with gourmet cookies and espresso. The auditoriums excel acoustically, with little-to-no audio bleed within other rooms, but sadly you can still hear the projector running during the quietest bits. One thing I can complain, is that their repertoire isn’t diverse enough, allowing the same film to be run on more than one screen. But on the other hand, it should help consumers, given the fact that this is a very busy place where tickets sell out quickly. I recommend entering the theatre around 45 minutes before the show, as this place can get very crowded.

as of today (and Friday’s features listed on Landmark Bethesda’s website), all the screens have been converted to digital projection: Barco DLP.

saw ‘Chicken with Plums’ (screen #6) this afternoon and the DLP presentation was outstanding – the cinematography without the glaze of 35mm grain looked meticulous and three dimensional at times, the shot of the snow looked vivid and tactile. The use of sound was equally impressive, some scenes were so quiet you could hear a pin drop, and when music was played, it created an airy and powerful impact.

Landmark plans to renovate this theater and add food and alcoholic beverage service to this theater: View article

the theater closed on March 29th and will reopen May 3rd with “a new look” according to Landmark’s website.

“After an extensive renovation, Landmark’s Bethesda Row Cinema reopens Friday, May 3 with a number of brand new, modern amenities including the addition of a full-service bar, luxury reserved seating in each auditorium, RealD 3D projection and an expanded concession menu. Each of the eight auditoriums features crystal clear projection and sound systems. They have also been outfitted with new plush, leather-like chairs designed to provide maximum comfort to patrons. Plus, the theatre has installed a new digital system that will provide a satellite feed for domestic and international performances. Seating in each auditorium is now entirely reserved, whether customers purchase tickets online, print at home or buy them at the box office.

“The minute one approaches the theatre they will see our stunning new marquee and quickly realize the attention to detail this theatre received. We begin a new chapter at Bethesda Row and will continue to provide the best movie experience in town,” said Landmark Theatres' CEO and President Ted Mundorff.

The theatre was remodeled from top to bottom to give it a renewed sense of style and contemporary feel. From the new, fully digital box office with specially lit LED screens featuring films and show times to high end wall coverings and oversized lounge-style seating in the bar, every aspect was designed to meet the demands of today’s discerning customers. As you go down the escalator, there is a shimmering screen over the lobby with glistening crystals. The brand new bar will feature a wide variety of beer, wine and liquor including many local brews and film-themed cocktails."

After reading much buzz about Cate Blanchett’s performance in the new Woody Allen film ‘Blue Jasmine’ and already tired with the traditional summer fare, I saw this movie at the remodeled Bethesda Row. Expecting to be bedazzled by the $5M remodel, I was disappointed. Aside from the new bar, leather seating in the lounge and auditoriums and, of course, the technical upgrades in projection, it does not look all that different. The paint scheme is different and the counters look Ikea-grade, which isn’t bad.

The new self service ticketing kiosks have huge screen displays, but most of it is not put to use by making the menu selection and fonts BIGGER. All that real estate on the screen seems to have gone to waste. Once you select your movie, you select your reserved seat. Unless its a special event with a large crowd, I do not like select seating at all.

On a table, by the doors, is a notebook with a schematic of the seating for the auditoriums. I later found out that the one for Auditorium 2 is wrong.

There was the usual ticket taker/greeter at the bottom of the escalator. I had arrived early enough to want to sample some of the new menu items touted on the website. Unfortunately, there was NOTHING on the menu board to suggest the wraps and other new things. Fortunately, I was approached by the attendant, who was friendly and showed me a notebook-type menu that had the wraps and other food items. While the pictures and descriptions were lovely, there was no mention of prices at all! The attendant had to look up my queries on the register. Suppose there were lines? What is the purpose of keeping the menu offerings AND prices hidden from view? Bad, bad, bad, bad.

I ordered the jalapeno cheese stuffed pretzel, which I loved from when they were offered at the AFI (then were forgotten to be ordered in the years after their remodel). For $4, its not bad, but smaller then the ones the AFI used to have. It was served hot from the convection/microwave they used to heat it up.

About 20 minutes before showtime, they were still cleaning up the prior show. When I was informed it was okay to go in, I had expected to be ushered to my seat, but no one bothered. In fact, none of the other patrons were escorted to their seats either. The older folks who came in were trying to find the tags on the seats to make sure they were in the right place. Auditorium 2 seems like the largest movie theater and I had hoped I would have some space to myself. Wrong. There were a group of loud French speaking patrons who sat behind me. Kept yakking until one of them probably got waft of my pretzel and decided to move. Thank you. Then two old ladies happened to choose the next two seats after mine. I call them Laverne & Shirley since they reminded me of the two tv characters; one of them with a distinctive NY accent..like Penny Marshall’s. One of them started chatting about the ticket for 5 minutes and how it seemed to read one way or another.

I had chosen row G as it was close enough to the screen but had leg room as it was situated by the walkway to get to the other side of the theater. In reality, they put a row of seats that blocks the path to the other side. I am probably spoiled by the enormous leg room and recliner seats at the Brandywine Xtreme Multiplex, but there is little leg room in front of the new seating area. I found myself having to get up, move to the aisle, so that patrons could access seats on my row. Only children or anorexic adults would be able to squeeze past a seated patron to move through to their seats.

Finally, the movie began after the usual pre show ads and previews. Volume was terrific as were the picture and sound. The Landmark trailer was decently loud and played to create that immersion experience with surrounds. I’d like to think there are curtains or draperies of some kind. In the Regals and Bow Tie’s..they move them to mask films according to their presentation format. One major detraction is the lack of sound insulation. You’d think with the millions spent they’d do something about sound bleed from the adjoining theater being heard into this one. Yeah, there was some big explosion boom I could hear and feel.

The movie was very good. I had expected the characters and their situations to be heavily cliched and, surprisingly, were not so. The writing avoided the usual soap opera-type dialog that accompanies movies with similar themes. It took me a few minutes to get into Cate Blanchett’s character, as I had expected to see/hear either Queen Elizabeth or the Elf Galadrel. Her character portrayal of the ex-wife of a Bernie Madoff-type character is very good. Yeah, she’ll be on that Oscar list of nominees for sure.

In summary, I think the remodel is a mixed bag. No menu visible on the menu board with prices. Decent sound and projection. Sound bleed from other auditoriums. Reserved seating should be for evening shows or special events. At least offer discounted parking for those who drive in. For the $25 or so I paid with parking, I probably could do better watching something formatted for IMAX-lite.

One more thing. Be warned about the Haagen Daaz ice cream store adjacent to the theater. I had an ice cream de leche caramel concoction that gave me bad cramping not too long after eating the $8.22 item. No, it wasn’t the pretzel because that food item was hot enough to have killed any food borne pathogen that may have been hatched. And yes, I did wash my hands before eating. :)

the worst renovation aspect that Landmark enacted was the adding of the lighting on the walls of the auditoriums – they don’t go fully off during the feature and thus ruins any and all scenes in the movies where it is darkly lit or a night scene. (‘Love is Strange’ looked like crap) It’s blatant and really REALLY visually distracting – it’s made me rethink of seeing movies here. I’m curious in knowing since the Arclight and Ipic theater (which opens this week) will factor in if Landmark might book one of the screens here with more eclectic programming (such as ‘week long run’ features, as they do with E Street; “Force Majeure” run here at Bethesda suggests that they are). Landmark seriously needs to bring more movies to the DC area closer to their New York City/L.A release dates, we use to in the 1970-80’s – we’ve slipped somehow.

Secondly the new seats maybe more comfortable and larger, but there’s not a lot of room from your knees to the seat in front of you, letting people get around you is a major pain in the ___.

screen 2 is the only auditorium to feature 4K digital projection. I am liking the ‘Wednesday Rewind’ (Classic) Film showcase with a showing in the afternoon and evening – most of the screenings have been shown in auditorium #5.

interestingly I was here yesterday to see the French movie: ‘Marguerite’ the soundmix comprised of classical / Opera music was just beautiful in 5.1 – but in auditorium #1 the seats actually fold up and down, thus getting around the seats A LOT much more easier. Screen 5 though the image seems dark to me, ‘Xanadu’ (as well as last year’s showing of ‘Mary Poppins’) the luminance is lacking.