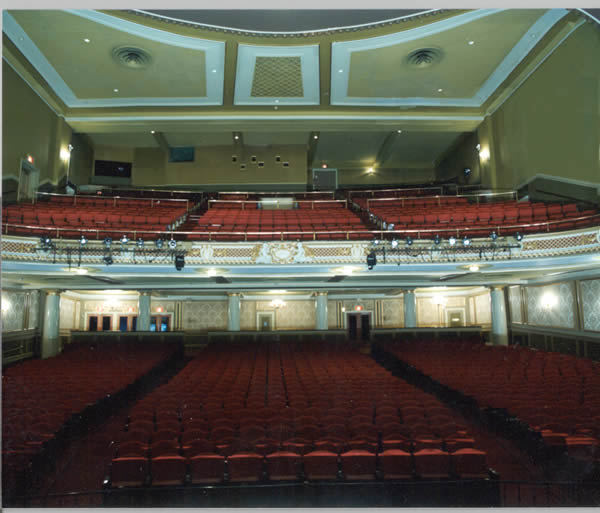 The theater was refurbished and reopened in 1978. No longer showing movies, the Maryland Theatre is now a concert hall.

Do you a schedule of events for spring and summer 2001?

The Maryland Theatre’s architect was Thomas W. Lamb. Initially it was a part of the Warner Theatre chain later the Stanley-Warner Theatres and finally RKO-Stanley Warner. The theatre has one screen. Between the time of its closure in 1974 an its reopening in 1978 it (plus the Colonial Theatre across the street) was owned by the Ray Kline family. The purpose was to conduct live Country Music shows (in the genre of the “Wheeling Jamboree”). This endeavor lasted for a few months, after which the Kline’s auctioned off much of the contents of the two theatres and later sold the buildings.
The Maryland Theatre Society was able to re-acquire those elements that had been auctioned and has restore the facility to its original splendor.

The Maryland Theatre was nearly destroyed by a fire in the 1970’s. The theatre itself was built behind an apartment building with the lobby running from the street to the auditorium. The two buildings were separate, with a distance of about fifteen feet between them. A passage way connected them. The fire destroyed the apartment building but the fire department confined the fire and saved the theatre itself. The lobby was destroyed. A preservation group was formed and saved the theatre, adding a small lobby on the front.

As I watched the firemen bring the fire under control, I asked one of them how bad the theatre itself was. His reply was that you could show a movie there tonight. (If you could stand the smoke.)

A footnote to the story: Several years after the apartment building was demolished, workmen excavating the area where it stood found the bones of a man who disappeared around the time of the fire. He had evidently been sleeping in the basement the night of the fire and his remains were overlooked.

For a listing of programs and concerts at the Maryland Theatre, visit their website at http://www.mdtheatre.org The Maryland is the home of the Miss Maryland Pageant as well as the Maryland Symphony Orchestra.

Originally one of Four Theaters in Hagerstown, including the Henry, Colonial, and the Academy. This theater has an amazing story of survival and is truly a landmark to the Hagerstown Area.

A personal story: My great-grandfather (Arthur Brounet) was an interior decorator who worked extensively with Thos. W. Lamb. One of the theaters (outside NY/NJ area, where he did most of the “great movie huses”) was the Maryland in Hagerstown. For his work there, he took his son, Harold, out of vaudeville with John Bunny to be an apprentice. While there, teen-aged Harold met a local girl (working a drug store counter). A romance ensued, followed by marriage, and my mother! (their only child). They separated and my grandmother returned to Hagerstown which I visited often as a child. I think I smoked my first cigarette (a discard – at age 9 or 10 , in the lobby). He also did some work for an Academy of Music in Hagerstown –(owned by a Mrs. Hamilton Briscoe)which may have been the Academy, but I’m not sure.
bobmarshall

I was here last year a local radio station did the wizard of oz matched up pink floyds dark side of the moon. What a great treat and only for $5!!

I am nintertested to know what part of France Arthur Brounot came from. The Hanover Theatre was decorated Brounot, and the structure was desinged by William Lee. Some have described the theatre as sort of Mediteranean. I believe it is a constrained version of Belgian or Northern French art nouveau.The rounded arches on the front facade would fit into an urban Brussels street landscape off of the Avenue Louise in Brussels Ixelles District. Did Brounot visit russels or Nancy before he came to America.Was he aware of the “new architecture” that emerged in Brussels during the 1890’s. The murals that Brounot executed in NYC remind me of murals in Prague. Alphonse Mucha spent most of his time in Paris. A few art nouveau era architects came to NYC at the turn of the century. Veinna Secessionist,Joseph Urban is perhaps the most famous. Was Brounot in contact with or at least influenced by of Joesph Urban, perhaps Alphonse Mucha? If there were connections such as this, the importance of the Hanvoer Theatre to art nouveau, understated as it is, in America should not be understated.