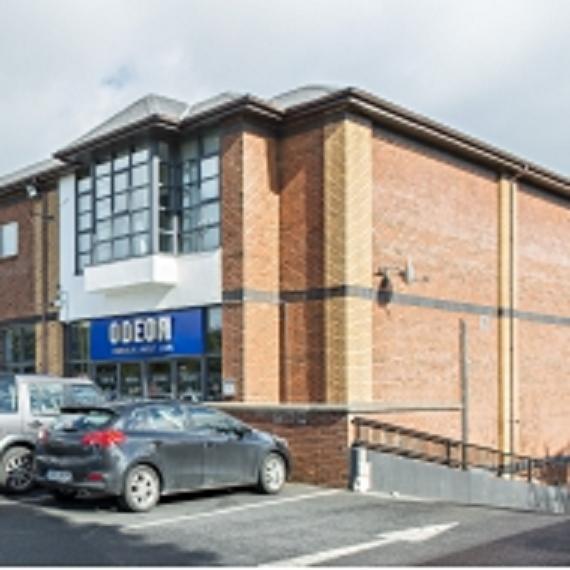 The original Ormonde Cinema in Stillorgan opened in 1954 and was at that time part of the independant Kavanagh chain of cinemas. Declining attendance saw the cinema close in 1978 and sold to developers. The original cinema was demolished as part of a shopping centre development.

Perhaps this will help.

While the original Ormonde faced the street directly, the redeveloped cinema complex is accessed from a short (private?) lane and the entrance is now at right angles to the main road.

Passing today the LED sign said that a new digital projection system was in operation in all cinemas.

The Cinema was advertised in the Irish Times on April 9th 2014 as for sale in excess of E3.5m. The current tenants Ashbourne Cinemas trading as Odeon are unaffected.

Opened 5 February 1983, five of the seven screens are situated at basement level.

On 1 June 2011 the Odeon/UCI group announced the acquisition of nine existing cinemas and two pipeline cinemas from Enterprises Enterprises (EE). Apart from three UCI cinemas and five Storm cinemas, the deal included the “recently acquired” Ormonde cinema at Stillorgan, according to the press release.

The previous owners of the Ormonde (prior to the sale to EE) were the O’Gorman family, who at that time, in partnership with the Spurling family, also owned two multiplexes in the Dublin area – Movies @ Dundrum and Movies @ Swords.

Regarding the claim that it was operated by Movies @ prior to the sale to EE; perhaps there was a level of management involvement by or co-operation with Movies @ in the period in question. For instance, the press ads in the Irish Times in the months prior to the sale to Odeon/UCI placed the Ormonde displays alongside the Movies @ displays, although they were not joint ads.