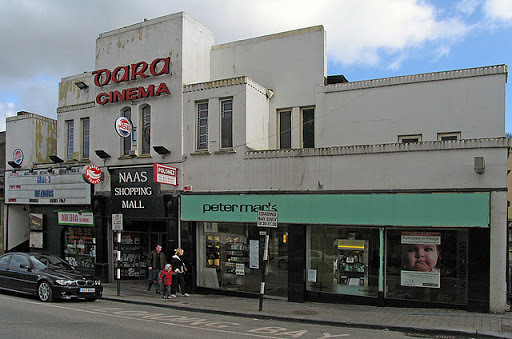 Opened as the Coliseum Cinema on 15th February 1940. Always independently operated, in later years it was twinned and re-named the Dara Cinema.

The Dara Cinema closed in 2007, following the closure of the Oscar Cinemas, Newbridge in January 2006. It was the last operating cinema in County Kildare, which in 1947 had 12 cinemas operating. Taken over by a church, films are screened once a month.

The Dara Cinema can be seen ‘lit up’ on the left of this night time street scene of Naas. Photograph taken around November 2007:
http://flickr.com/photos/paulrailton/511169450/

The Coliseum opened on 15 February 1940 with Batchelor Mother and closed with Lust for a Vampire on 8 August 1972. The 750-seater was owned by the Kelly Family who sold it to Modern Irish Theatres and it reopened on 1 September 1972 with the Dirty Dozen. It was remodelled in the early 1980s to incorporate a shopping mall and eventually closed on 8 February 2007 with Goal 2 and Infamous. The cinema is now occupied by the Church on Main Street who have been there since 2008. Films are still shown once a month in the 168-seat screen. Information from an article by James Durney. More history at http://www.kildare.ie/ehistory/index.php/naas-cinemas-the-coliseum/ and http://www.kildare.ie/library/ehistory/2012/08/naas_cinemas_the_dara.asp