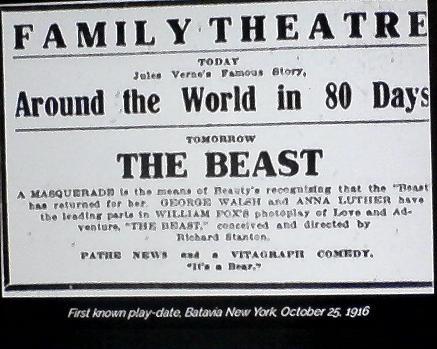 The construction news column of the August, 1912, issue of The Lather, a trade union journal, said that a three story theater was to be built at Batavia. The architect was Leon H. Lempert.

Given the timing, and the restrained classical style of the Family Theatre’s facade, so characteristic of Lempert’s designs during that period, it seems very likely that the project listed in The Lather was this theater. The earliest mentions of the Family Theatre I’ve found in Batavia newspapers are from early 1914.

This weblog post from The Daily News says that demolition of the Dipson Family Theatre began on April 21, 1965. It also says that the Family Theatre had been built in 1912. The house was one of the first buildings to be destroyed for Batavia’s first urban renewal project.

In a partial list of work by Leon H. Lempert & Son, Ranjit Sandhu says that the Family Theatre was rebuilt in 1923 with the design done by Leon Lempert, Junior.

Lempert Senior went into semi-retirement in 1906 and died in 1909, so Lempert, Jr. must have been the architect for the original Family Theatre design of 1912 as well.

Despite Senior’s death in 1909, the firm name Leon H. Lempert & Son still appeared on a list of architecture firms in New York that was published by the new York Society of Architects as late as 1922. I’ve found the firm name used in announcements about current projects appearing in trade publications as late as 1920.

Dipson remodeled the theater and reopened it on November 29, 1923 with a showing of “Going Up”. http://www.archive.org/stream/exhibit00newy#page/n335/mode/2up/search/batavia

I found snippets alluding to the installation of an organ in 1912, a fire in 1954 and live performances in the early 1960s. Unfortunately the full links were not available for me to elaborate further.

According to his 1961 obituary, Nikitas Dipson began operating the Family Theatre at Batavia in 1914. He had earlier operated the Lyric Theatre and another movie house in Jeannette, Pennsylvania. In the 1920s he operated a chain of fifty movie theaters, and provided booking services for 200. In the late 1920s he leased twenty-five of his houses to Warner Brothers.

History of the City of Batavia by Ruth M. McEvoy says that the Family Theatre was originally designed by local architect Frank Homelius, and that it opened on January 16, 1913.