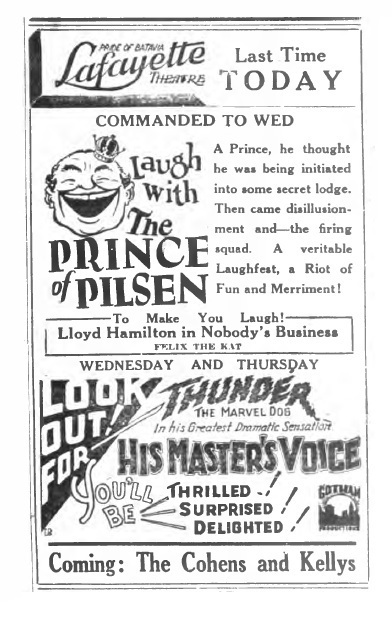 Here is an item from Boxoffice magazine, April 1950:

Warners Theaters, which last week turned over the Family Theater here to Dipson Theatrical Enterprises, has announced the closing of its other local theater, the Lafayette. It is understood that the Lafayette lease will run until July. Jacob Farber of New York owns the house. The Family and the Lafayette were the only local theaters until three years ago and have been operated by Warners for 20 years.

The Lafayette Theatre launched on July 9, 1925 for the Western New York Theatre Enterprises Circuit by Fred M. Zimmerman. The Faber Brothers built the theater with a 52' width and height. The theatre had 700 seats on the main floor — 22 seats per row — and 400 additional seats in the balcony.

A Winer and Sons organ was installed when the theater was built.