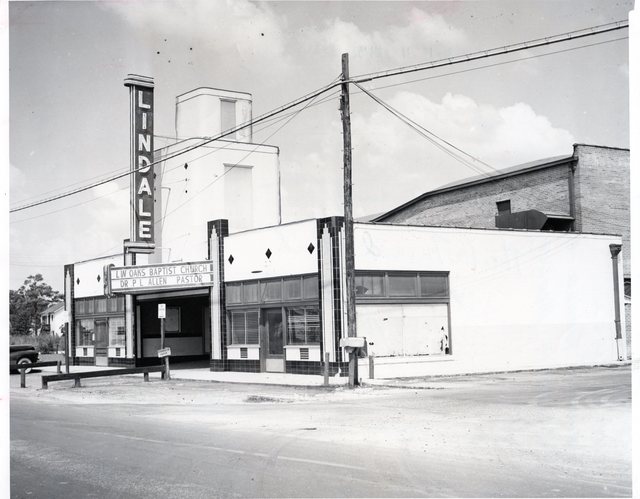 The Al Ray Theatre was located at 5006 Fulton Street, a block or two north of Calvacade Street. It was opened on January 30, 1941. It, along with the Village Theatre and Plaza/Vogue Theatre, showed foreign films in the 1960’s. It became an adult theatre for a while in the 1970’s and the building was used as a church for a while in the 1990’s.

It has since been demolished.

David Welling’s book “Cinema Houston” mentions the Al Ray and notes that the building has been demolished.

The theater and the entire block was demolished – and replaced with a large luxury home completely out of place in my working-class neighborhood.

Onece they ran a Rudolph Valentino film. Some how they got hold of a nitrate print. The print caught fire and damaged the booth. I saw the damage. Not pretty.

“THE LINDALE, located at 5006 Fulton St. on Houston’s north side, opened on January 30, 1941. The 713 movie house was owned by Oskar Korn whose O. K. Theatres, Inc. circuit also owned the Globe, Port, Grand, Avalon, Galena, Venus and Midway theatres in the Houston area.

The Lindale, which offered matinees only on weekeds, was initially managed by Jimmie Dezendorf. It offered second run features, B-movies and serials with ticket prices at the time it opened were 20 cents for adults and 10 cents for children.

Competition from television and opening larger, more modern theatres like the Fulton and the Granada nearby caused attendance to the Lindale to fall off significantly in the early 1950s. The July 2, 1952 issue of Variety carried a brief story stating that The Lindale had been purchased by the Lin Oaks Baptist Church from OK Theatres for $125,000.00.

As television slowly eroded the need for the neighborhood bijous, the Lindale found new life in 1960 the hands of theatre empresarios Al Zarzana and Ray Boriski. The new owners transformed into a niche theatre than ran foreign and art house films, as well as selected revivals of Hollywood classics.