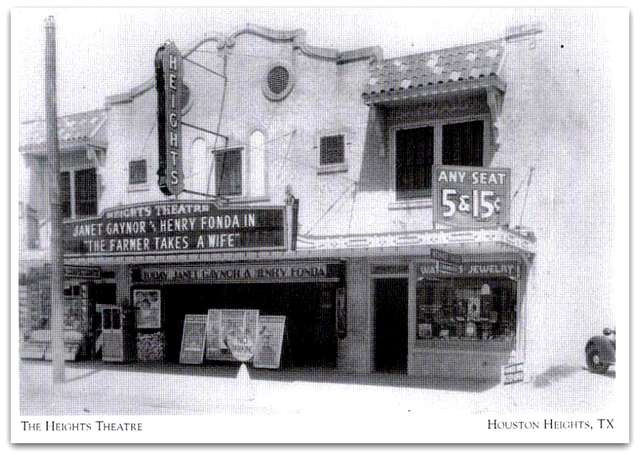 In March 2013, it was operating as a special events venue.

I guess they rebuilt it.

Judging from the Art Moderne facade and the somewhat grungy looking side walls seen in those photos, I’d say the theater was probably just gutted by the 1969 fire rather than “burned to the ground” as the Times article had it.

The Heights opened on May 14, 1929. The premier feature was “Sunset Pass” with Jack Holt and Nora Lane.

There is a video with some interior views on this page. Address should be changed to 339 W. 19th Street.
http://tinyurl.com/yjsecz6

There is a 2006 photo of the restored 1935 Art Moderne facade, and a view dated 1935 showing the original mission style front, on this page at Houston Deco.

The theater is now an art gallery and event space.

From the 1930s photo postcard of the Heights Theatre in Houston.

The Heights Theatre has been converted into an event center operated by Gallery M Squared. Here is a link to their web site. The Theater History section (hover cursor over “About” under the gallery name) has an early photo of the auditorium.

The status on this needs to be changed to open.

This theatre’s blade marquee shows up several times in a crime documentary on ID TV.