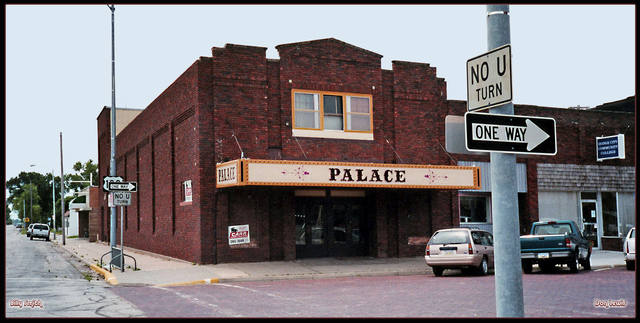 Here is a new new link for the Palace Theater in Kinsley.

I’m not finding any Odeon Theater in Kinsley. Any ideas?
http://tinyurl.com/yey444b

The July 12, 1917, issue of The Kinsley Graphic said that the new Palace Theatre opened on Tuesday, July 10. It replaced a smaller house of the same name that was to be converted into retail space. The reporter was quite enthusiastic about the new theater:

“The new Palace Theatre was opened Tuesday night and is one of the finest, most complete and artistic play-houses to be found in the state. It is built of tapestry brick and gives a fine appearance, with the quaint lights which decorate the front. The lobby is large and roomy and contains the ticket office on one side and a confectionary stand on the other, which will be operated by Harney and Read.

“There are two sets of doors which will insure comfort during cold weather. The lobby is well lighted and the concrete floor is marked off in a tiled effect. The walls are finished in a green mottled effect. A wide stairway leads to the balcony which has a seating capacity of 100. The cage for the machine is also in the balcony. It is made as nearly fire-proof as possible. The floor is of concrete and the walls are of expanded metal covered with concrete. A ventilator in the ceiling also makes for safety in case of fire. The wiring here and through out the entire building is concealed and encased in metal conduits.

“The main floor has a seating capacity of 400. In all ways the seating capacity has been sacrificed to comfort. There is ample room between the seats which measure thirty inches from back to front. The seating arrangement is divided into three sections. There is a section of four seats to a row along each side, and the middle section contains seven seats to a row. This eliminates much crowding in efforts to obtain seats. Each seat is equipped with a hat rack. The isles are four feet wide and are laid with cork carpet. There are numerous exits, there being two three-foot doors at the rear, and four large doors at the front. There are also exits from the stage and basement.

“The stage is 33 by 22 feet in dimension, and is splendidly equipped with fire-proof scenery. A large switchboard gives opportunity for many different lighting effects. The acoustic facilities are fine which is always a great satisfaction. There is a large orchestra pit which can be entered from either the basement or the auditorium. In the basement are two large dressing rooms which are very comfortable. The hot water heating plant is also placed in the basement.

“The interior decorations of the building are very beautiful. The walls are tinted in two shades of green, and large columns are placed along the side walls. The cap-posts and proscenium arch are finished in old ivory, and the woodwork is of mahogany finish. A large latticework screen stands between the last row of chairs and the doors. There is a metal ceiling of beautiful design and painted a soft cream color. The semi-indirect lights are very handsome and insure perfect lighting. A complete ventilating system also insures comfort during any kind of weather. Electric fans are placed along the walls, and ventilators and a large suction fan can also be operated.

“Mr. Harwood has spent much time and thought in planning everything about the theater to insure the greatest, degree of comfort to the patrons and he has certainly succeeded, for it would indeed be hard to suggest any improvement that might be made. With the class of pictures and entertainments which Mr. Harwood will bring here, the new theater will no doubt prove to be very popular.”William Harwood was operating a theater in Kinsley at least as early as 1913, when he was mentioned in the November 8 issue of The Moving Picture World.