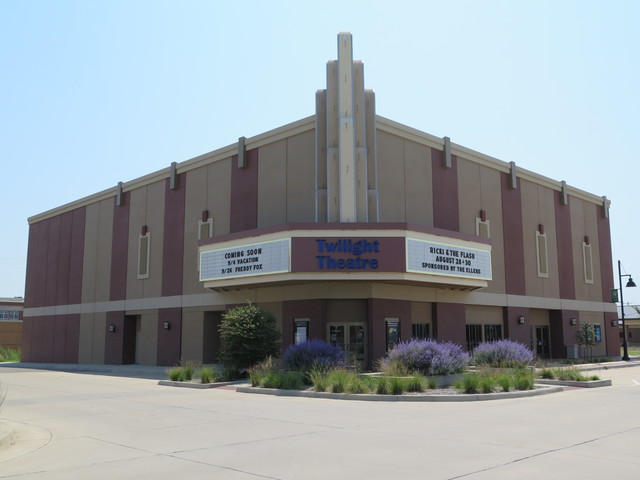 Greensburg originally had an Opera House & Auditorium which opened at 132 S. Main Street on April 16, 1917. It was renamed Twilight Theatre in March 1923 and it closed in 1989. That theatre was destroyed by a tornado in May 4, 2007. It has its own page on Cinema Treasures.

A new Twilight Theatre was built at the corner of S. Main Street and Florida Avenue which opened April 24, 2015 with a screening of “Back to the Future”. On the two following days the movies “Willy Wonka and the Chocolate Factory” and “The Wizard of Oz” were screened.

Street View is odd on this one. Only Hwy 54 is mapped out, but the difference between the Street View and Satellite view is totally different. Street View shows after the tornado, satellite show before. Lots of building are gone…

One more odd thing… In Street View, if you are dead smack in the intersection that the above map puts you in, there are no street lights in any direction. Just one click in either direction, the street lights reappear.

Here’s a color photo of the old Twilight Theatre on the City of Greensburg’s web site. This photo shows it from another angle. The cable channel Planet Green has posted this rendering of the proposed replacement for the Twilight Theatre. Plans call for 458 seats, and the building will be of neo-moderne design.

On a recent episode of Planet Green’s series about Greensburg, it was revealed that the local school district is planning to have a partnership with the operators of the theater so that when it is built it can be used for school functions during the week. The rebuilt school will not have an auditorium, and apparently the old Twilight Theatre only operated on weekends in any case. Kiowa County only had a population of a little over 3000 even before the tornado, so a full-time movie theater wouldn’t be economically viable there, especially as it will have to be located in costly new construction.

The Twilight is mentioned surprisingly often in Boxoffice Magazine, as the long-time operators Charles and Ben Spainhour frequently wrote pieces for the magazine’s “The Exhibitor Has His Say” feature. A thumbnail biography of Charles Spainhour appeared in the March 3, 1945, issue of Boxoffice, which revealed that he bought his first theater (for $375, fully equipped) in 1916. He bought the Twilight the next year. His first theater was also in Greensburg, but Boxoffice didn’t give its name.

The Twilight Theatre is being rebuilt. Image of the construction from the 5th anniversary of the Greensburg tornado: http://www.flickr.com/photos/historian77/7146937779/

The History Channel show “American Pickers” was set in Greensburg last night. (11/20/813). The guys were in a warehouse filled with items from the tornado’s aftermath that were going to be auctioned. Two 35mm projectors and lamp houses from the Twilight Theater were shown, as well as an exterior photo. They were expected to bring $500 each at auction.

Go to Street View in Google Maps, you’ll see a new theater is being built.

Partial linkrot repair: The cable channel Planet Green is no longer in operation, and the URL of its web site now redirects to a web site called the Mother Nature Network. It has several items about Greensburg (use the site’s internal search) but none of them are about the theater.

The City of Greesnburg web site,however, has several pages mentioning the Twilight (internal search again), including pages with the two pre-tornado photos and the rendering of the new building.

Plus here is a clickable link to Keith Wondra’s photo of the theater under construction.

Those views both date from 2012, and there has been progress since then. The Twilight Theatre now has its own web site, and more recent photos can be seen there in the “Construction” section. In addition, there are a couple more vintage photos of the Twilight at the “History” link, under the “About” section. The new Twilight will have a 27' x 55' screen, so it will rival those in much larger cities.

The new Twilight Theatre was designed by Spangenberg Phillips Tice Architecture, the Wichita firm that has designed projects for Warren Theatres. The firm donated the plans for the new house.

A 55 foot wide screen is gonna take a lot of light to light it up, probably around 7,000 watts.

“A Kansas town devastated by a major tornado in 2007 has rebuilt its historic theater, lighting up its giant screen with a state-of-the-art digital cinema projector donated by Christie®.

The projector illuminates the 58-foot-wide screen of the Twilight Theatre and Community Auditorium in Greensburg, Kan., which is part of Kiowa County – about 100 miles west of Wichita. The theater celebrated its grand reopening the weekend of April 24 with a red carpet-style opening night, featuring live music and a free screening of the 1985 hit movie, Back to the Future. The celebration continued over the weekend with family friendly activities and movies.

The opening of the Twilight Theatre in 1917 marked a new era of entertainment in America. It featured modern opera chairs, beautifully painted Art Deco styling throughout, and a soaring, 24-foot ceiling. It was soon offering programming that included silent films, vaudeville, musical performances, and rallies for war bonds. The entire building was destroyed in the EF-5 tornado in 2007 that also leveled 95 percent of the town and badly damaged the remaining structures. Against all odds, the town rebuilt again to become America’s leading community in LEED-Certified buildings, with wind turbine energy supplying much of its power.

The new, ultra-modern Twilight Theatre, in partnership with the Kiowa County School, will show first run movies, serve as the school’s auditorium, be a community meeting space, and host theatre, dance and other community functions. It includes an improved sound system featuring Dolby® Surround 7.1, and other modern amenities.

“When we approached Christie, they immediately offered to donate one of their top-of-the-line digital cinema projectors. We were absolutely thrilled by their generosity,” said Wagner. “Christie’s digital cinema projector is truly the theatre’s ‘crowning jewel,’ providing us with a state-of-the-art auditorium on par with the best, most modern facilities in the world. We are very appreciative for the consideration of great companies such as Christie.”

“Christie’s projector was installed by Cinema Equipment & Supplies (CE+S), which also donated its services, and for this I know that we, Adam, and the community, are very appreciative,” said Scott McCallum, Christie’s Midwest-based Entertainment Solutions Manager.

“Giving back to the community is an integral part of our corporate culture and something we strive to accomplish every day,” said Kathryn Cress, vice president, Global and Corporate Marketing, Christie. “We didn’t hesitate to contribute to the town’s amazing success story. They literally came back from the rubble, becoming the ultimate example of what people can accomplish when they work together for a common cause. We are proud to know that our digital cinema projector will be providing many years of exceptional entertainment to the people of this amazing community.”

Any interior pictures of this theater?