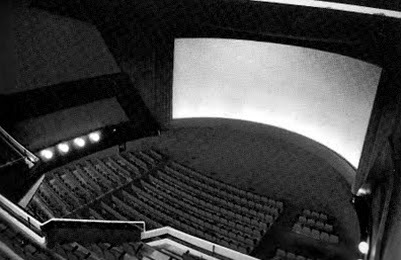 Located in a district just south of the city centre, this modern glass fronted building contained flats, offices, shops and a large single screen cinema. The Cine Regio Palace opened on 15th May 1962 and was built for and operated by the Balana group. The interior decorations by architect and interior designer Antoni Bonamusa were fairly plain, but functional for a 1960’s cinema. There was a large relief panel on the right-hand wall of the foyer containing larger than life male and female figures. An open glass-sided staircase led up to the balcony. Inside the auditorium, seating was provided in stalls and balcony. There was a huge, curved floating screen which had no curtains. Bonamusa worked with several other theatre architects on this project.

On 5th February 1964, a fire, caused by an electrical short circuit, damaged the cinema. It was re-opened on 29th March 1964 with Burt Lancaster in "The Young Savages".

Due to its slightly off the beaten track location, away from the main entertainment area of central Barcelona, the Cine Regio Palace was never a great success. It was closed down by the Balana group in the mid-to-late 1990’s. It was demolished and an office block containing Government offices was built on the site.

A vintage photograph of the Cine Regio Palace in August 1986:
View link

It was a large, rather plain, modern theater with lots of drapes adorning the walls with plush seats. I sat in the balcony and saw “Those Magnificent Men in Their Flying Machines” on a reissue back in the mid 1970s. It was very clean and appeared exactly as you see it in the “How the West Was Won” photo above. I distinctly recall the great sound. Yes, as indicated above, it was in neighborhood near the Cine/Sala Diana and Cine Arnau along the Paralelo (Avenue - Paral-lel in the Catalan language). Nearby was the well-known “Molino Rojo” burlesque theater which ran well into the 1980s. The theatrical Teatro Apolo (yes, one L) and Victoria theaters are nearby.