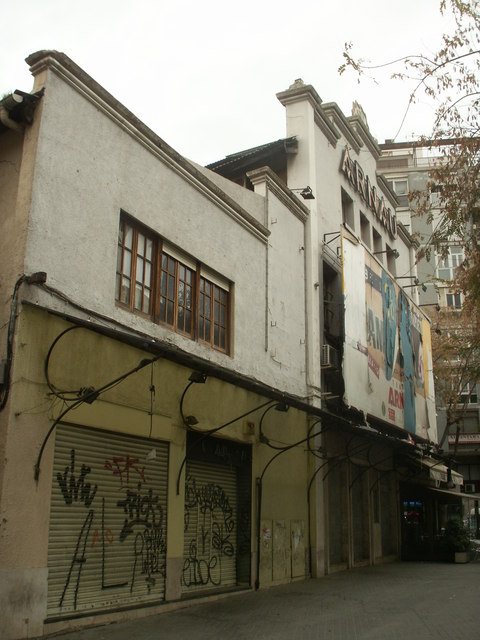 Located in a district just to the south of the city centre, the Teatre Arnau opened as a live theatre on 28th October 1903. It was designed by architect Andres Audet i Puig. Initially it hosted alternative pantomimes, melodramas, concerts and in 1904, films were screened.

The plain facade is only broken by two series of windows, six above the entrance (now bricked in) and four at the top. Inside the auditorium, seating was provided in orchestra and balcony levels. The front of the balcony was open, with decorative wrought ironwork. Upon opening it was considered Barcelona’s best and most comfortable theatre.

From 31st May 1915, it was re-named the Teatre Follies Bergere, and hosted many great Spanish actors, actresses and stars on its stage.

From 18th September 1930, it was re-named Cine Arnau, when it opened as a full time ‘talkie’ cinema. After the Spanish Civil War began, it began screening double-bill feature programmes.

Films remained at the Cine Arnau until 21st December 1982 when it reverted back to live theatre use as a music hall. This continued until 2004, since when it has been closed and shuttered.

In 2007, it was taken over by the city council and proposals are for it to become a cultural arts centre.

A close-up photograph of the Teatro Arnau’s facade. Taken in May 2005, the torn poster of the last production at the theatre is still on the advertising frame:
http://www.flickr.com/photos/eviltwin/14755681/