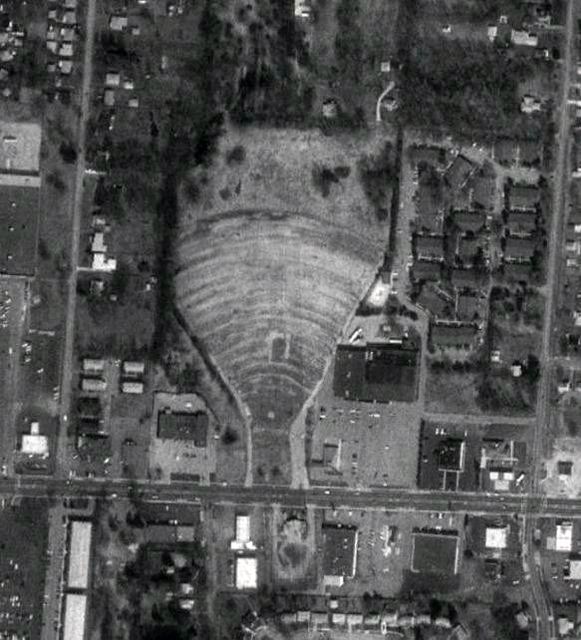 Miles East Main. I went there often when younger. Used to wait for the projectionist to get hot and open the door. One night, he was running flat films and had to run a scope trailer on one machine. It was great to see him hustle around to put the reel on and thread up that other machine.

There was a root beer drive-in outside the gate that you could see from the inside. It was a sure sign the evening was getting late when they turned off the revolving root beer mug on top.

This was never twinned…always a single screen.

For the record, Whitehall is an eastern suburb of Columbus, OH. There were 2 other drive-ins on E. Main Street in Whitehall, one was the Inn-Town and I think the other was the EastSide.

Spent many a summer night at this drive in. Love Bug, Chitty Chitty Bang Bang, 101 Dalmatians, etc……Remember seeing Orton Davis fourth of July Fireworks, pre- RED WHITE AND BOOM, from the drive in.

I was wondering, has anybody talked to the Chakeres people and see if they have any old pictures of there drive-ins?

Thank you so much for these uploads. My mom and dad bought their first house in Whitehall in 1955, and drive-ins were our chief form of movie-going entertainment. I remember the name Miles, and I have a few memory fragments of this drive-in in particular, due to its configuration on the north side of Main and facing south.

Thanks also, whoever contributed the note about the neighboring root beer drive-in. Don’t remember that specifically, but I have no doubt whatever that we were patrons there as well!

Looks like this has mostly become a residential subdivision, back behind the medical center and Golden Corral restaurant buildings that were on either side of the entrance.

It was Dog-N-Suds root Beer drive in that later became Joseppi’s Italian restaurant. The actual entrance of the drive in is where the Golder Corral Restaurant is now and the Medical center was right next to it. The Medical Center is an old Kroger store and was there in the 70’s when the Dive-In was still operating. In later years they did away with the cabled speakers and you could pick up the sound on your AM radio at a very low power station. There were one or 2 spots at Kroger where you could park and watch and hear the movies for free.

yes, the bulk of the property is now the Langport subdivision. the basements were very hard to dig due the years of graveling and re-graveling the old drive in lot.