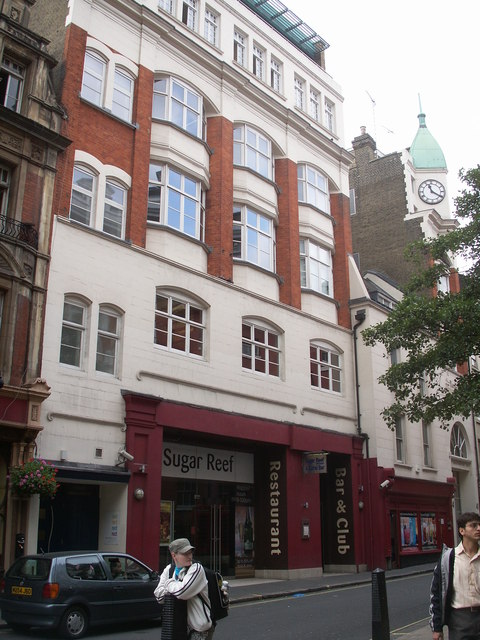 The Piccadilly Cinematograph Theatre was the seventh cinema in the small circuit operated by Montagu Pyke. It opened on 5th March 1910 with 300 seats, all on one floor. The screen was at the front of the building behind the small foyer, so the audience walked away from the screen after entering the auditorium.

In the early-1930’s it became the Piccadilly News Theatre, and later was re-named Centre News Theatre. After World War II it was taken over by the Clavering & Rose’s Cameo circuit and was re-named Cameo Cinema.

Following a re-decoration in November 1961, it was re-named Cameo Moulin Cinema and began a policy of screening censored sex films, mainly dubbed from European countries. The name ‘Moulin’ was inspired by the famous Windmill Theatre across the street.

Classic Cinemas took over the Cameo chain in September 1967 and it was re-named Classic Moulin Cinema in 1972. Four additional screens were added in adjoining premises on 28th April 1977, the original 300-seat auditorium remained untouched. In November 1985, the nearby Dilly Cinema Club at 41 Great Windmill Street was incorporated into the complex, providing its sixth screen. Initially this screen was named the Cannon Dilly Cinema, but later this name was dropped. The Cannon Cinemas group had taken over Classic Cinemas and the Moulin was re-named Cannon Moulin Complex. Due to its sex orientated programming, the Cannon Moulin Complex was never advertised with the other mainstream Cannon Cinemas.

The rise of videos and satellite television, which both made more readily available sexually explicit films than those on offer at the Cannon Moulin, led to its sudden closure on 10th April 1990. All screens were playing triple bills, and the last programme to play in the main original screen was "American Girls in Heat", "Women of Pleasure" and "Sweet Body of Bianca". Similar films were screened in the other five screens. The building remained empty for a number of years. Around 2000, it was converted into a up-market burger restaurant and bar named Sugar Reef. This closed in early-2009, and in early-October 2009, a bar named Grace opened. That had closed by early-2017 and in May 2017 the building was being fitted out to become Sophie’s Steakhouse restaurant. The original barrel-vaulted ceiling in the auditorium has been retained.

This film theatre was chock full of amazing personalities with the senior manager George park in charge.

I am immensely grateful to the company for giving me this position and the experience that went with it and for putting up with me.

The management, the projectionists, the attendants and other staff such as Hazel the intervals ice cream vendor were highly memorable.

Hi, I worked at the Classics Moulin, Colindale, and Ramsgate as a projectionist in 1977-78. I was on a working holiday from Australia and obtained work with Classic. I have written a short story about my experiences while working for classic cinemas. I have some photos taken in the bio-boxes of the three cinemas, and some of the exteriors.

Cannon were slightly embarrassed by having this cinema in their circuit and declined to let the Cinema Theatre Association pay a visit.

Reopened as Classic Moulin 5 on April 28th, 1977 as the first adult multiplex (perhaps in the world). Grand opening ad posted. 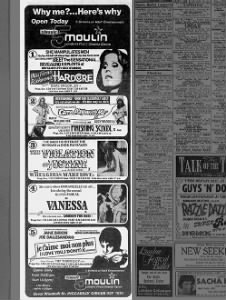