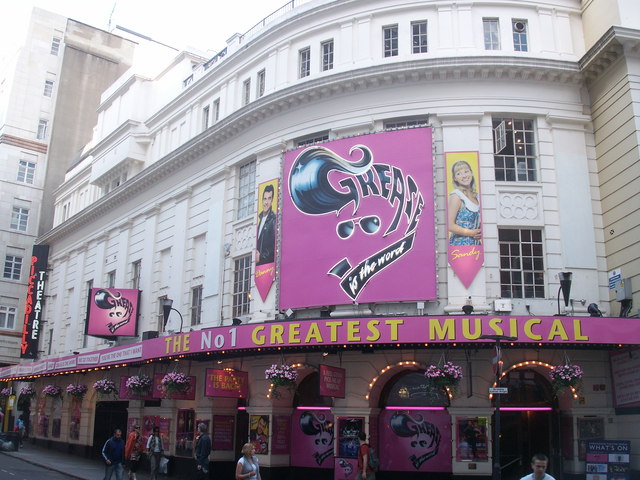 The corner entrance has a Portland Stone facade, with eleven bays which are boarded by columns and contain windows. The entrance foyer is wood panelled. Stairs lead down to the orchestra stalls level, which is below street level. The Royal Circle is at street level and there is a Grand Circle located above. The proscenium is square and there is a large stage and 21 dressing rooms. The interior was designed by decorator Marc-Henri in colours of green and gold, with natural English walnut woodwork.

From 27th September 1928, the Piccadilly Theatre was taken over by Warner Bros. and re-named Vitaphone Theatre. It opened with the UK Premiere of Al Jolson in "The Jazz Singer", becoming the first cinema/theatre in the UK to screen Vitaphone talkies. Al Jolson appeared in person, on stage to sing ‘Mammie’. This succesful film was followed by other Warner Bros. Vitaphone talkies:- May McAvoy in "The Terror", Al Jolson in "The Singing Fool" (which had opened at the Regal, Marble Arch), Corinne Griffith in "The Divine Lady", Pauline Frederick in "On Trial" and Dolores Costello in "Noah’s Arc". This was followed in December 1929 with the United Artist’s film "Evangeline" starring Delores del Rio. Following this, it reverted back to live theatre use with a revival of "The Student Prince" and was renamed Piccadilly Theatre again.

In December 1937, a new form of entertainment was presented at the Piccadilly Theatre by impressario Firth Shepherd. It had the title "Choose Your Time" and consisted of a mix of newsreel film, a Walt Disney Donald Duck cartoon, a ‘swingphonic’ orchestra, live variety turns on the stage and a short comedy play "Talk of the Devil" which starred Yvonne Arnaud and John Mills. The Piccadilly Theatre was used to screen morning ‘Trade Shows’ to the film industry during the late-1930’s and into the 1940’s.

Noel Coward’s play "Blithe Spirit" premiered here in July 1941, but soon transferred to another theatre. John Guidgud appeared in "Macbeth" in 1942, and two musical comedies "Sunny River" and "Panama Hattie" were staged in 1943. The theatre received damage from German bombing in 1944 and was closed for several months. It re-opened in 1945 with Agatha Christie’s "Appointment With Death". Another notable production was Godfrey Tearle and Edith Evans in "Anthony and Cleopatra"(1946). In 1955, the theatre underwent a restoration, which removed most of the original Marc-Henri decoration, and the auditorium now had a much more simple style. The original highly decorated ‘Safety Curtain’ remained untouched.

Peter Ustinov appeared in "Romanoff and Juliet" (May 1956) and in 1960 "Toys in the Attic" was a success. The Lionel Bart musical "Oliver" was revived at the Piccadilly Theatre in 1967, and from 29th September 1972 (during a ‘dark period) the Piccadilly became a cinema again when the film version of "Oliver" was screened for two weeks.

Other big live theatre hits have been "Who’s Afraid of Virginia Woolf? with the original Broadway cast starring Uta Hagen and Arther Hill, " "Man of La Mancha", Angela Lansbury in "Gypsy"(1973), Dennis Quilley in "Privates on Parade", a French style cabaret show “Y” which had sections of the theatre re-seated with tables and chairs and the auditorium was painted black, Claire Bloom in "A Streetcar Named Desire"(1974), Henry Fonda in "Clarence Darrow"(1975), Julie Walters in "Educating Rita" and Matthew Bourne in his all-male production of "Swan Lake" in 1996.

Like many theatres, it has also seen its share of ‘flops’, including “Bachelor Flat” which ran for 4-performances in May 1960 and mega-musicals such as “Mutiny”(1985), based on ‘Mutiny on the Bounty’, “Metropolis”(1989) based on the famous Fritz Lang film, “King”(1990) about Martin Luther King and “Which Witch”(1992) a Norwegian opera/musical.

On 7th November 2019 a section of the plaster ceiling in the Grand Circle level of seating collapsed onto the audience soon after the begining of a performance of “Death of a Salesman” starring American actor Wendell Pierce & Sharon D. Clarke. There were no serious injuries and the theatre containing over a 1,000 audience was evacuated. The next days' performance was cancelled and the theatre re-opened on 11th November 2019. The cause of the ceiling collapse was a water leak.

It is a successful West End theatre and is operated by the Ambassador Theatre Group Ltd.

The Piccadilly has a unique movable ceiling.
The entire ceiling forward of the balcony’s is a false platform that at the press of a button can be lowered to the level of the front of the second balcony. This has the immediate effect of making the huge auditorium feel much more intimate.
Used very rarely theses days but back in the 70s and 80s, when the theatre was home to more plays than musicals, it could be seen in use quiet often.
I’ve often wondered why it hasn’t been removed because it certainly isn’t the most attractive of features in an otherwise beautiful auditorium.

A few photos – interior and exterior can be found here:–

Thanks Ian.
i’ve often wondered what the original ceiling was like above that tin foil monstrosity?

Here is a 1929 photograph of the Piccadilly Theatre playing the Vitaphone Picture “The Divine Lady” with Corrine Griffith. Alongside is a 1984 photograph:
View link

Its just as stunning today as its always been.