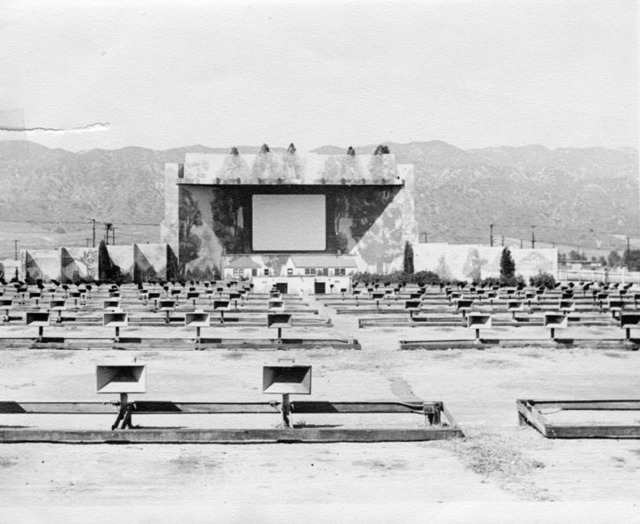 The San Val Drive-In was the second drive-in theatre to open in California, after the Drive-In Theatre on Pico Boulevard, Los Angeles. It opened on June 19, 1938 with “Who Killed Gale Foster”. It was operated by Seth D. Perkins. It originally had a capacity for 590 cars. It was closed in February 1939 when it suffered dame from a windstorm. It was reopened in late-March 1939. The San Val Drive-In was forever immortalized in the James Cagney classic “White Heat” when a scene in the movie was filmed on the site.

Operated by the Pacific Theatres chain, the San Val Drive-In closed in the mid-1970’s and the site is now the home of several production and effect houses.

I remember riding with my P.J.’s and pillow in the package tray of our ‘36 Ford with Mom and Dad …

Dad worked at lockheed and we couldn’t wait until he came home on Friday’s or Saturday’s for “Movie Night”.

The only problem was during 1943 – 1945 when the air-raid sirens would go off, the screen went dark and everybody was told to stay in their cars … kinda scary … and it usually happened during the Cartoon … DARN!

The San Val is featured in “White Heat” (1949). Listed on the marquee outside are “South of St. Louis” and “Siren of Atlantis”. On the screen, however, is an action scene from “Task Force”.

The car-hop’s uniforms are great.

Hi Lost Memory. Did you post the release date of “Blood Feast” as a point of information? Or to dispute ken mc’s post that it was playing at the San Val in April 1964?

It was often the case that drive-ins didn’t show first-run movies. In ken’s ad, the movies Hud, Lilies of The Field and Cleopatra are all advertised as Oscar winners. They were all released in 1963, and the ceremony for those awards was held and televised on Monday, April 13, 1964. [Tom Jones won Best Picture.] Therefore, ken’s post is correct.

Here is a September 1961 ad from the LA Times:
http://tinyurl.com/ykrjr3l

Boxoffice, April 1, 1939: “The San-Val Drive-In, in Burbank, has reopened after being dark for a month while damages, caused by Southern California’s windstorm of a month or so ago, were repaired”

Boxoffice, Aug. 5, 1939: “First giveaway ever booked in a drive-in theatre is being given a tryout at Seth Perkins' San-Val. Perkins is handing out free crockery to every woman patron once weekly.”