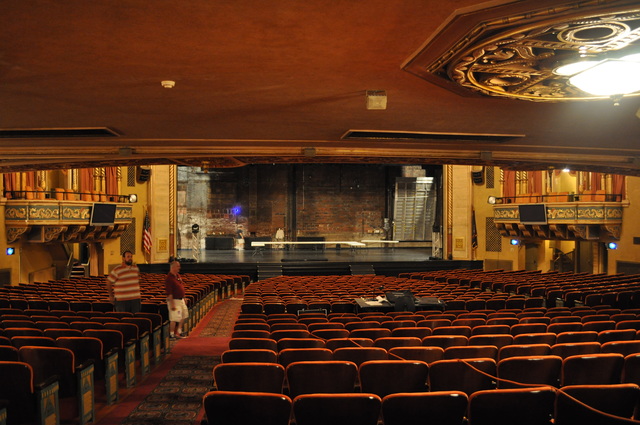 The Northampton National Bank was built in 1873. It had a granite facade and foyer, which were retained when the bank was demolished in 1910 and the Neumeyer Theatre was built. It was screening movies by 1914, and around 1916 it was renamed Northampton Theatre. It was later renamed Colonial Theatre and had 725-seats and was operated by Wilmer & Vincent Corp.

In 1926 architect William Harold Lee was commisioned to drew up plans for a new larger theatre, which opened as the State Theatre on March 8, 1927 with 1,824-seats. Lee was inspired by the architecture of ‘Old Spain’ and by the Davanzanti Palace in Florence, Italy and the theatre had elaborate frescoes & guilding. In the 1960’s the foyer was repainted brown & blue which covered over the frescoes in this part of the theatre. In the 1970’s it was in use as rock music venue. It now features live concerts and stage shows and occasional ‘Classic’ movies.

The State Theatre is listed on the National Register of Historic Places.

Wow – I knew movies would look good in there! How wide was the screen? From the width of the proscenium it looked to be as big as the Ziegfeld’s, or even bigger.

When you see a theater like that it’s hard to believe anyone would even think of tearing it down, but of course we all know it happens all the time.

To be sure, when it comes to seeing a movie like SPARTICUS, that is definitely the kind of theater you want to see it in! At the same time, when it comes to seeing a group like the Moody Blues perform live, a theater no less than this will do! Which leads me to wondering if any efforts are being made so that it can present both motion pictures and live presentations? And I’m not talking about anything tacky or make-shift when it comes to a fly-up or retractable screen, but something very professional and compliant with William Howard Lee’s masterful architecture.

Meantime, to Bill, I’m sorry to hear Ray Thomas is no longer with the Moody Blues. The flute solo he does in “Nights in White Satin” is one of the most memorable I know of and what I wouldn’t give to have been there when they performed this live for the first time at the Isle of Wight Concert! Imagine hearing that song for the first time live! But hearing them do a seasoned version of it live at the State — assuming that was still in their repertoire — must’ve been pretty memorable, too!

As far as I know, “Nights in White Satin” is part of every show the Moody Blues give. The woman who plays the flute in place of Ray Thomas is quite good, too. What bothers me most is that Mike Pinder left the group under bad circumstances so none of his compositions are ever performed anymore, and he wrote a lot of my very favorite Moody Blues songs. Oh well.

Thanks, LM! 1967 – that must be one of the first rock videos ever. The Beatles did a few around that time too (“Strawberry Fields Forever”).

I don’t know if it was ever true, but years ago when Pinder was dropped from the Moody Blues, I remember the rumor circulating at the time was because he was bald. And after Pinder’s departure, the Moody Blues sound was never quite as great, as innovative. The 1970s, unlike the ‘60s, was when the music industry suddenly turned very cutthroat, since by that point it became ALL about money. You can really see that transition vividly if you watch the movies WOODSTOCK and MESSAGE TO LOVE: THE 1970 ISLE OF WIGHT CONCERT back to back. At the 1970 Isle of Wight Concert, when the Moody Blues debuted “Nights in White Satin” for the first time — at least, to a mainstream audience — they and all the other acts were perfectly willing to do the show for free, while the concert promoters tried to turn the event into one big rip-off. And the audience kept being told, “The artists won’t perform unless you pay up,” making the artists look like they were the guilty greedy ones. From the artists’ viewpoint it must’ve felt pretty terrifying. For imagine if you will, you’ve created this music, it’s your creation, but you can’t perform it for free if you wish to because of the contract you’ve been signed to. It must’ve felt like they were suddenly living under slavery. Add to this that the Isle of Wight Concert itself took place on public trust land, meaning it was illegal to charge people money to see concerts there. But….it was the ‘70s meets the '60s, and the Moody Blues, along with the other artists, had little choice but to handle it as graciously as they could. And they did a beautiful job of it. As Ray Thomas told the audience that night, grateful for how much it appreciated their never heard before songs (at least mainstream-wise they had never been heard before), “Nights in White Satin” being one: “What you’ve given us tonight, you can’t put a price on that!”

As for YouTube, since I’m using dial-up and have yet to find a way to download videos from there so I can watch them off line at their right speed, nonetheless I probably have those Moody Blues rock videos you’re referring to on VHS. I know somewhere in my old stash of tapes I’ve got a psychedelic version of them doing “Nights in White Satin,” plus old b&w footage of the original 1965 Moody Blues doing “Go Now.” And where I was growing up I had never heard the Moody Blues “Nights in White Satin” and “Tuesday Afternoon” till 1972. I’m a bit stunned to learn only now that those songs were five years old by that point!

Here is a September 3 article about an appearance by Glenn Beck at the State:
http://tinyurl.com/nupvrj

The appearance isn’t scheduled until January 9, but the NAACP wants it canceled now.