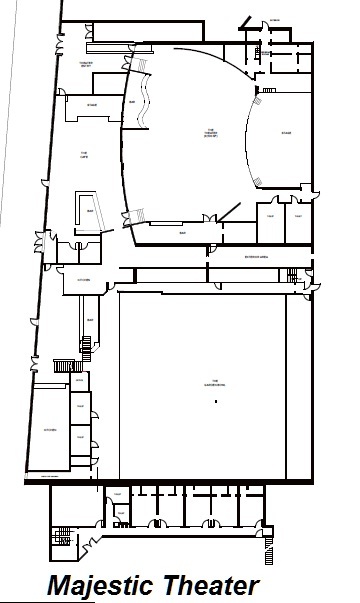 The Majestic Theatre was opened on April 1, 1915 as a legitimate playhouse with 1,651 seats. By the late-1920’s had switched to films. It was designed by C. Howard Crane.

An interesting early feature of the Majestic Theatre was its lighting system which could simulate dawn or dusk in the auditorium before the show. It also had an early air-conditioning system where huge blocks of ice in the basement were blown on by large fans and the air circulated throughout the theatre.

In the early-1930’s, when Woodward Avenue was being widened, Crane’s original facade was remodeled by the firm of Bennett & Straight who created a colorful, soaring terra cotta-clad Art Deco style facade for the Majestic Theatre.

Eventually, the Majestic Theatre became a second and third-run house, then, after the theatre closed in the 1950’s, it housed at various times a church, phototography studio, and, later, a trophy store.

Finally, in 1987, it was restored and reopened as a concert hall. The Majestic Theatre has since become one of Detroit’s premiere concert venues for rock, blues, reggae, and world music performers.

Uploaded some iPhone photos of the main auditorium in its current state. Very interesting complex.

2018 story about renovation with photos.

I’ve just posted a clipping (Newspapers.com) of what I think may be the FIRST advertisement for SAMMY DAVIS JR … from May of 1929 … which would have made him 3 ½ years old! It is an advertisement for the Majestic Theatre and Sammy is billed as “Little SAMMY DAVIS Jr., Colored Boy Marvel” I thought readers of this theater’s page would enjoy seeing it posted here a bit of ENTERTAINMENT HISTORY!

Link with a circa 1920 photo Majestic and neighboring Hippodrome, which I believe is the same one as mentioned on the Rogers Theatre page.

Above photo added to gallery with link. Appears to not work in the comments.

The Majestic Theatre that was next door to the Hippodrome was not the same house as the 1915 Majestic. The first Majestic must have either closed or been renamed by the time the new Majestic opened in 1915. As the Hippodrome opened in 1912 and lasted less than a year, closing in early 1913, the photo showing both of these houses in operation had to have been taken during that brief time.

I’ve been trying to discover if the old Majestic survived the opening of the new house, but the task is complicated by the fact that Detroit changed its addresses in 1921. As near as I can figure, the old Majestic’s address of 231-233 ended up in the 1500 block, and was just below Witherell Street. The first Majestic and Hippodrome were across the street and up a couple of doors from the Woodward Arcade, still standing at 1545 Woodward, so the first Majestic was probably at approximately 1550 Woodward. Apparently Cinema Treasures has no pages for either of them.

Ah, so the most recent five images in the gallery belong to the earlier Majestic at 231-233 Woodward. Do you want to just create a page for that one, and I’ll transfer the pics to there?

I could submit a page for it, but it would be very sketchy as I don’t have either a timeline for the theater or definite evidence of what the modern address would be. Perhaps Ken Roe would be able to find more information about it and add a page. I think he might have access to resources that I don’t have.