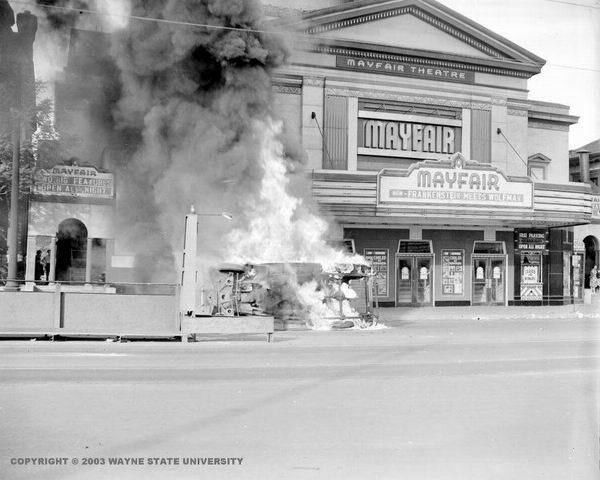 What is now known as the Bonstelle Theatre has had a long and varied life.

It was first built in 1902, as Temple Beth-El, whose congregation moved from their previous long-time location on Cadillac Square after that space, above a drugstore, was outgrown. Designed by Albert Kahn, the synagogue was constructed in grandiose Neo-Classical style, imitating the Pantheon in Rome, complete with a large dome and pedimented and colonaded facade, the synagogue was as ornate inside as out, with marble floors, gilding everywhere and intricate mosaic work. It was, until the 1920’s, the largest Jewish house of worship in Detroit.

After the congregation left the synagogue for a new home in the 1920’s, the building was purchased by actress and theater company manager Jessie Bonstelle. Bonstelle had first begun managing her company in Syracuse, New York at age 19, and had, since 1910, leased Detroit’s Garrick Theatre.

She hired noted theater architect C. Howard Crane to remodel the former synagogue as the Bonstelle Playhouse, in 1925. Seating was increased to 1,200 and a stage built. The facade was simplified by the removal of the columns and its round stained-glass windows covered by a new terra cotta facade.

In 1928, it was renamed the Detroit Civic Theatre. Miss Bonstelle died in 1932, and her theater company sold the building. It reopened a year later on October 20, 1933 as a movie house, now called the Mayfair Theatre.

Still part of the University to this day, it has since been restored and renamed the Bonstelle Theatre, in honor of its founder. It continues to shine as a venue for the best in live performances from Shakespeare to musicals.

Lily Tomlin and Tom Skerritt are among those to have gotten their acting starts at the Bonstelle Theatre.

thanks but FYI I put it in there soon after I wrote it, I just placed it there so I remembered to add it, but thanks btk630