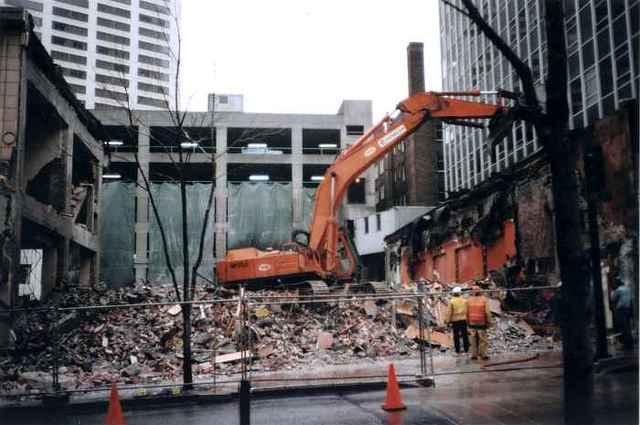 The Music Box was one of Seattle’s premier theaters. Equipped for 70mm, it had a massive screen that wonderfully overwhelmed the theater. I saw “Days of Thunder” in 70mm here in 1978 and it was stunning!

There is part of the Music Box installed in the lobby of the City Centre building in downtown Seattle. It is a large ornamental carved stone arch that once graced the front of the building above the marquee. There were 3 of these arches and they contained windows. Don’t know what happened to the other 2, probably purchased during demolition.

Some pictures of the Music Box can be seen here:
View link

The Music Box Theatre was designed by architect Henry Bittman. Previously an engineer, in which capacity he worked with architect Henderson Ryan on the innovative 1914 design for the Liberty Theatre, Bittman went on to gain an architect’s licence in 1923 and, in addition to the Music Box, designed at least two other theatres in Seattle, the surviving Embassy Theatre of 1926, and the Art Deco Roosevelt Theatre, aka Pike Street Theatre and Town Theatre, which opened in 1933 and has been demolished.

Bittman was a master of terra-cotta decoration, and used it on numerous Seattle buildings including and the one he designed for the Fraternal Order of Eagles. The Eagles' building was renovated in the 1990s as a home for the ACT theater company. This was an appropriate use for the building, as the club had been founded by six Seattle theater owners, including John Cort, who went on the become a leading impresario in New York.

Days of Thunder came out in 1990, three years after the Music Box was demolished. You couldn’t have seen it there in 1978.

droben must have been thinking of “Days of Heaven,” which opened at the Music Box in mid-October, 1978. This was one of the few theaters showing the 70mm version of the movie.

Grand opening ad from August 2nd, 1928 is in the photo section.

Yes the Music Box indeed had a massive wide screen. The original proscenium must have been changed to fit it out. I saw Days Of Heaven also at the Cinerama in a Cinerama style film process or a special lense that was also dramatic. What a great visual treat that film is when viewed that way. Must have been great at The Music Box.

It looked like the wide screen was installed in front of the proscenium along with curtain tracks for that screen. The screen appeared large because of the small auditorium size, but it was certainly wider than the actual proscenium.