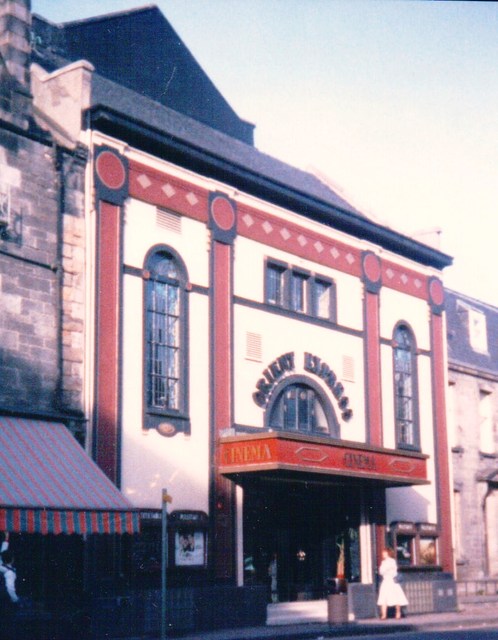 The Cinema House opened on 19th September 1913. This cinema was a unique reverse cinema with the audience entering the auditorium from the side of the screen. The balcony was entered via a broad catwalk to the right hand side of the auditorium. The street behind was at least one story higher than Viewfield Place, which meant that the rear of the stalls was underground. In the 1920’s a cafe was added to the facilities.

Originally part of the Caledonian Associated Cinemas Group, the cinema became an independent in 1982 and was renamed the Orient Express, being converted into a twin cinema, with the two screens being named Pullman 1 & 2. Later a third 100 seat screen was added (in the former cafe area?) but this was a video operation and was not successful, closing in the late 1980’s. The Orient Express Cinema closed on 14th May 1992 with “Hook” and “Fried Green Tomatos at the Whistle Stop Cafe”.

It was then aquired by Robin’s Cinemas Ltd. and re-opened on 9th October 1992 with Walt Disney’s “Beauty and the Beast”. The third screen was re-opened again, this time with 35mm projection and 74 seats.

The death knell was sounded with the opening of a new out of town Odeon multiplex at Halbeath in July 2000, which finished off the last of Dunfermline’s traditional cinemas. It was converted into a short lived nightclub.

From 13th June 1992, Historic Scotland designated the former Cinema House a Grade B Listed building. It is listed on the Buildings At Risk Register.

I have a photograph of this cinema taken before it closed down, do you require a copy?

It was recently announced in the courier and advertiser newspaper that planning permission has been granted to convert this cinema to a night club and that because it had an entertainment licence this is why it was granted apperantly the inside is going to be gutted out thereby destroying the interior of an art deco cinema forever what a bloody disgrace!

The nightclub in the former cinema was short-lived, and the building has been empty for a few years. It has now been reported that a lap-dancing club is to open in the venue, after councillors approved the entertainment licence without knowing what the specific entertainment was!