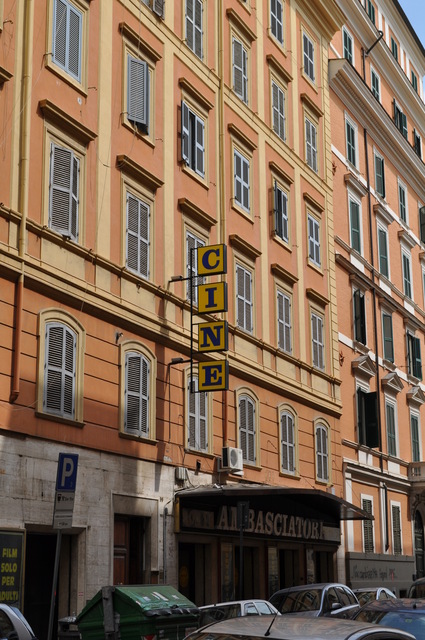 Located in a street just to the north of Rome’s main Termini railway station, the Cinema Ambasciatori is built into an apartment block and opened prior to 1940. The original seating capacity would have been for 600, with 360 in the orchestra and 240 in the balcony levels. The auditorium lays parallel to the street, behind the apartments.

There are four sets of double doors which provide entrance into the spacious foyer, decorated in white marble on both the floor and walls. In the main foyer and also the balcony foyer are black leather sofa’s for patrons to relax on. Inside the auditorium, the lower section of the walls are in dark marble, with a silver metal material on the upper section that has small holes, making it look like a fabric. The ceiling has a central recessed rectangle that originally contained two troughs of concealed lighting. The rear ceiling over the balcony has a ribbed finish in plaster. The projection box is located at the rear of the orchestra, beneath the balcony.

I believe that the original proscenium opening was altered and widened in the 1950’s to accomodate CinemaScope.

The Cinema Ambasciatori has been an ‘Adult’ cinema for many years. The ceiling is now painted black, but that seems to be the only change to the ambience of the building. Unusually, even in 2008, projection is via film and not Video/DVD, which is now usually the format used today in adult cinemas. Once an hour, there is a break of a few minutes when the cleaners lights come on, and the reel is changed in the projector (there is possibly only one in operational use now).

Seating is comfortable and the distance between the rows are spacious. The screen size is huge, although I doubt many adult films were shot in widescreen to fully utilise this screen. The sound is rather poor, but dialogue is minimal in these films, so it not too much of a problem. The cinema is exceptionally clean and well run and caters for a mainly gay male audience, with ‘straight’ sex films being screened.

So that’s where those Trust scenes were filmed! Thank you.

On May 18, 1940, decades before its red-light cinema days, the Ambasciatori was showing the 1937 Danish-Norwegian film “Laila,” filmed in Lapland, per a notice in Il Messaggero.