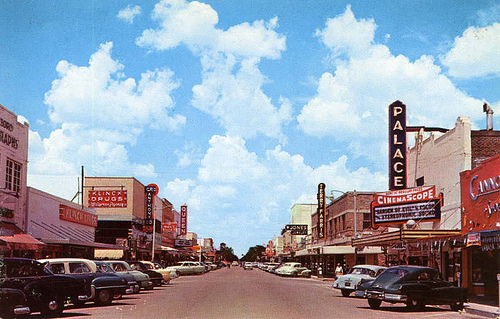 Built on the site of an earlier Queen Theater which opened in 1914. This new Queen Theater was opened August 16, 1940. It operated until at least 1951.

The Queen is mentioned in a Boxoffice Magazine item about L.J. Mason published in the August 7, 1948, issue. It says: “Mason opened his first theatre, the Star, in 1924 at Harlingen…. He opened the Queen in McAllen a few years later with John D. Jones as his partner.”

The Queen was still in operation in 1957, when the August 10 issue said that it was being managed by Lew Bray Jr., whose father had bought the house in 1952.

From 1954 a picture postcard of the Queen and Palace Theaters in McAllen.

Thanks Don for the great picture.

Glad you like the postcard Mike. I’m just the middle man on this one. The thanks all go to Billy Holcomb.