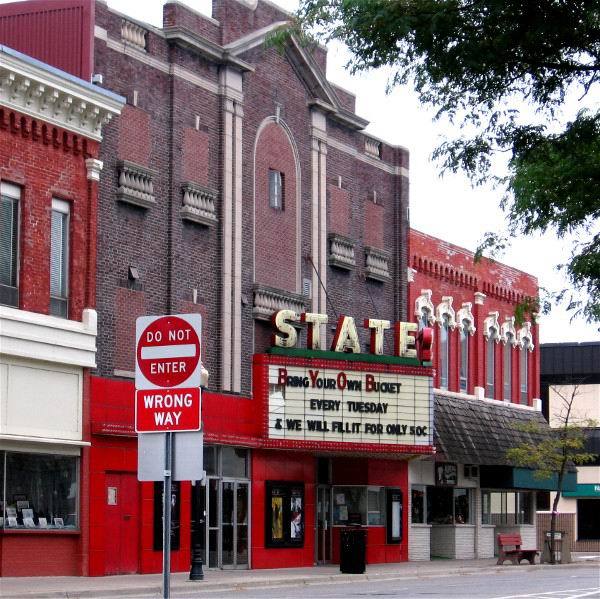 Opened as the Maltz Opera House on October 10, 1879. By 1941 the Maltz Theatre was operated by Butterfield Michigan Theaters Co. It was closed on March 16, 2020 due to the Covid-19 pandemic. AMC announced in August 2020 that the closure would be permanent. Restoration work began in 2021 to remove the sub-divided auditoriums and bring it back to a single auditorium. It reopened as a performing arts theatre, reverting back to its original Maltz Opera House name.

This was known at the Maltz Theatre in the 1940s.

The Maltz Opera House was built in 1876. This book, a history of Alpena published in 1891, has both a brief biography of George Maltz and a short article about the opera house, with a drawing.

Julius Cahn’s Theatrical Guide lists the Maltz Opera House as a second-floor theater seating either 880 or 900, but in the interior photo linked above by Lost Memory the auditorium doesn’t look at all like something from the late 19th century, so there must have been extensive alterations to the theater at some point, probably in the 1920s-1930s judging from the decor. Most likely the original auditorium was demolished and a new, ground floor auditorium built.

The current facade, though of a similar architectural style to the original, shows numerous differences as well, including a substantially different pattern of fenestration (now bricked up) on the upper floors. It’s unlikely that much remains of the original Maltz Opera House, other than parts of the walls.

The Maltz Opera House launched November 10, 1879 with “The Rose of Auvergne” and “"Lischen and Fritzchen.” AMC closed its Classic State 3 just over 140 year later on March 16, 2020 due to the COVID-19 pandemic. The circuit made the closure permanent at the end of July of 2020. It then sold off both the State and the Royal Knight to Jeff Konczak and his wife, Tina, who hoped to restore both venues from ‘plexed to single stage venues.

The old Maltz Opera House which became the State Theatre is being restored to its original glory. Demolition is underway of the three smaller auditorium which hid the beauty of the 1925 vintage theater. Details at https://alpenamarc.com/

Please rename this theater entry to Maltz Opera House, the name it is going by today.