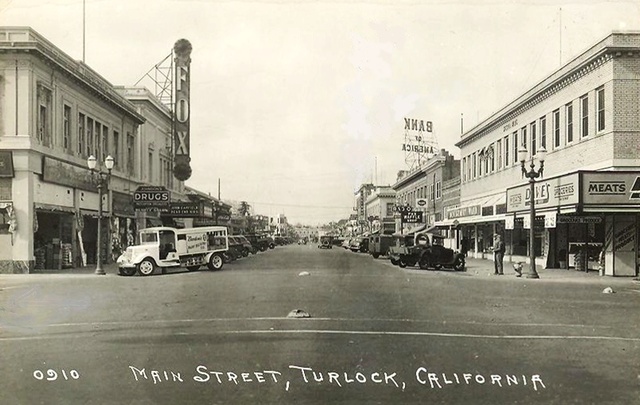 In late-November of 1954, while showing Spanish-language pictures, Fox West Coast closed the theatre suddenly. The city of Turlock had previously found twelve fire code violations which had gone uncorrected. So closing it at a time when theatre attendance was in decline and it was in need of upgrades, if not a remodel, was probably an easy call.

In January of 1955, the building was bought by a developer who planned to turn it into a bowling alley. In June of 1955, the ten lane Turlock Bowl opened on the second floor and then in December eight more lanes opened on the first floor.

After being vacant for many years, It was destroyed by fire on June 29, 1972. The determined cause of the fire was children playing in the building. In July of 1973, the city demolished what remained of the building.

I’m not sure that the Fox Theatre in the ACI photo lostmemory linked to was at Turlock. In 1942, the Fox was in the building in the postcard photo at the top of this page. In the 1950s it was converted into a bowling alley seen in this photo. In 1972 or 1973, the building was destroyed by a fire seen in this photo (the caption gives the date of the fire as July 1, 1973. I don’t know which year is right.)

The Fox name was supposed to have been moved to the Turlock Theatre in 1954, but there’s a photo of the Turlock with movies from 1958 and 1959 on its marquee. I’m beginning to question the claim that the Turlock was ever renamed the Fox. Maybe this house was the only Fox Theatre Turlock ever had.