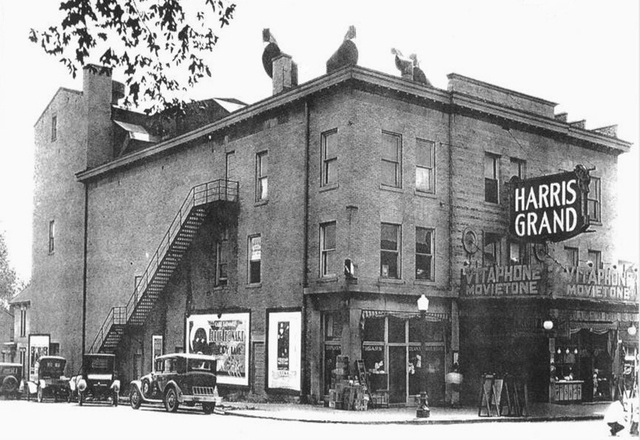 The Harris Grand Opera House was opened in 1907. It was badly damaged by a fire on July 2, 1942. It was rebuilt to the plans of Chicago architect David N. Sandine and reopened July 29, 1943. It was extensively remodeled in September 1948. In August 1966 it was renamed Towne Theatre.

This theatre was never owned by Kersotes. It should be removed from their list.

The Harris Grand theatre was at 7th & Walnut Sts on the northeast corner lot. It was also known as Towne Cinema. The Harris Grande was co owned with the Princess by Y & W theatres. Y & W sold the HG to Peter Terlukos who remodeled the badly rundown theatre and renamed it to the Towne Cinema to distance it from it’s lackluster past. Then afer some troubles with the distributors Turdlucos sold the TC to Bill Dennis. Dennis ran the theatre for a number of years but he continued turlucos' practice of double tickets sales at the box office until the distributors got wise and pulled their product after a long investigation with ticket buys. This led to a lawsuit in federal court. Somewhere in all of this Dennis tried to get his worthless son in the Union, which they wouldn’t do and that led to the first lockout of the union. Kerasotes was a distant third by the way, mid america at the village was the second lockout. With Dennis having difficulties with poor product and an effective picket line he had the theatre burnt down and his insurance has yet to settle. The site is currently an apartment building with ground floor commercial. Kreasotes never owned it and as far as I know it had too much bad luggage for even crooked Kerasotes to consider it.

The July 11, 1942, issue of Boxoffice reported that the Harris Grand Theatre had suffered a major fire and only the walls were left standing. Later issues said only that the theater had been gutted. The October 3 issue, which gave the date of the fire as July 2, said that permission had been received to begin reconstruction of the theater. The project didn’t get underway until 1943, when the February 6 issue of Boxoffice reported that the contract had been awarded to the C.A. Pike Construction Company.

The theater was finally reopened more than a year after the fire. The July 31, 1943, issue of Boxoffice said that the opening had taken place the previous Thursday. It gave the original construction date of the theater as 1906, and said that the Harris Grand had been built by the late Robert H. Harris with money earned from a travelling stage show. The Harris Grand originally presented stage productions, but added vaudeville and movies later, and was the second theater in Indiana to present talking movies.

The article added that “Little change has been made in the interior of the house, aside from decorations, except that the boxes have been removed and replaced with ornamental panels.”

The January 3, 1943, issue of Boxoffice said that plans for the rebuilding had been drawn by Chicago theatrical architect David Sandine. Y&W Theatres must not have been pleased with the results, as just five years after reopening the Harris Grand underwent a $40,000 remodeling which included a “..new marquee, completely revamped new front and extensive interior remodeling” according to Boxoffice, September 18, 1948.

The purchase of the house by Peter Turlukis and its renaming to Towne Cinema was reported in the August 15, 1966, issue of Boxoffice. I haven’t found anything about the final fire and demolition, but Mr. and Mrs. Bill Dennis are mentioned as exhibitors at Bloomington in Boxoffice as late as 1976. The name of their theater at that time is not mentioned.

Bloomingpedia says that the Harris Opera House was built in 1907, and was designed by the architectural firm of Nichols & Son. In 1923, John L. Nichols (his son, Bridge Nichols, had died in 1911) drew the plans for remodeling the Harris Grand Theater.