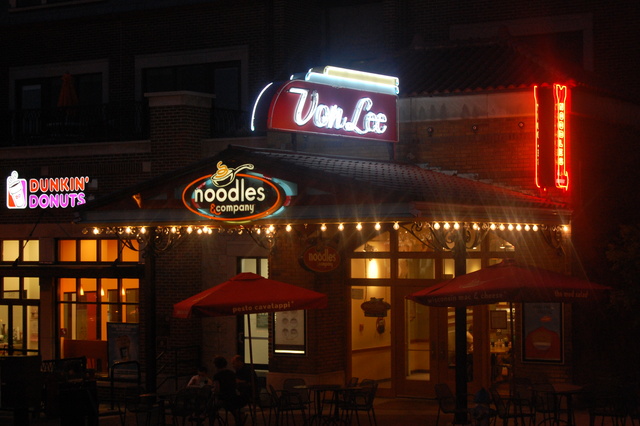 Built in 1928 as the Ritz Theatre by local investors, the Von Lee was renamed and reopened in 1948 by the Vonderschmitt Theatres chain.

A spacious single-screen cinema now converted into three smaller auditoriums, the theater rests on the border between historic downtown Bloomington and the Indiana University campus.

Purchased in 1976 by Kerasotes Theaters, operations were suspended in 2000 as the company built two multiplexes in the city, making the historic cinema expendable to their operations.

Now owned by the City of Bloomington, the Von Lee has been the center of various community efforts to reopen or otherwise "Save The Von Lee", and it has also since been designated a historic site.

However, it has remained dark since October of 2000 and the auditorium has been demolished. Offices have been built on the site, while the front section of the theatre severs as a restaurant.

The second IDS story above is now at http://tinyurl.com/rrp59

You can read the latest on plans for the Von Lee building at http://tinyurl.com/frqj6 The gutting of the building to enact this plan recently began (or was going to, anyway). I’m sad that the Von Lee will no longer be a theatre. Many people worked hard to save it, and in the end, only slightly more than the facade was saved, despite the theatre’s historical status.

I’ve good memories of the place—watching Bergman and Fellini films there, and the AFI’s series there in the 1970s, for example. The last film I saw there was, I believe, either Brain Candy or Trainspotting.

As a sidenote, I heard but do not know if it is true that the owners of the Von Lee (the Vonderschmitts, that is) also owned the Y&W Drive-In at the northern edge of town. I also wonder if the Y&W was related to the 3-screen Y&W in Merrillville, IN.

According to the 1963 motion picture almanac, Nova Vonderschmitt was the owner of the Vonderschmitt chain. The chain’s theaters at that time were the Von Lee, the Von Ritz in Bedford, the Indiana in Bloomington, the Von Castle in Greencastle and the Strand and Varsity in Crawfordsville.

Here is a photo from the 1960s. The theater was being used for zoology lectures given by a local professor:
http://tinyurl.com/2oybyc

The VON LEE was among a group of about 100 theaters that installed Dolby Stereo for their engagement of Close Encounters Of The Third Kind.

I miss the Von Lee. It was the perfect place to see art films. Oh what the heck, I even liked watching the occasional blockbuster type movies there. I was very disappointed when Kerasotes closed it and I was extremely peeved when they gave it to the city with the condition that they never show film there. I never knew all of the details behind that. At first I was thinking they didn’t want any first run movies to play there as it would be competition but I ended up hearing that they didn’t want ANY films to play there, even art films or archive films. Too bad.

There is a view of the remodeled Von Lee on this site:
http://tinyurl.com/l47xsh

According to the final paragraph of this article, about the failed attempts to save the Von Lee Theatre, virtually nothing remains of the original building but the facade and the entrance. Other sources suggest that parts of three walls of the auditorium might have been saved, but for all practical purposes the three-story office building that now occupies most of the site is entirely new construction. Even the “Von Lee” sign mounted above the entrance canopy is only a replica of the original.

This brief video, made during demolition, shows the extent of the devastation. Though there are many Internet sources that tout the “adaptive reuse” of the theater, so little of it remains that I’d be inclined to mark the Von Lee as demolished. It will certainly never be a movie theater again.

Here’s an historic photograph (a smaller version of which also appears in the article I linked to) showing the narrow entrance. The theater was L shaped, and the top of the auditorium is hidden behind the Victorian house that once stood inside the L. Kerasotes built an addition to the theater on the site of the house in 1976. That, too, is now gone.

I’m not sure why we classify the style of the Von Lee as Art Deco. The entrance with its tile roofs looks as though the architect was making a stab at something Oriental, highly suitable to the noodle house that now occupies the ground floor front. I doubt that the reopening in 1949 (the building served as a grocery store through most of the 1930s and 1940s) led to an Art Deco interior being built. Most likely the re-theaterized interior was in the basic Streamline style of the era.

When you look at the side of the building, you can see that part of the wall was saved (I posted a picture showing this). But I agree that it was a practical and cost saving measure in the construction of the new building.

In his 1998 song “Miss Missy”, rocker John Mellencamp (born in Seymour, IN, but living in Bloomington, IN) references the Von Lee:

“There’s a band playing down the street we could see

Movie showing down at the Von Lee

A church supper with Grandma and Grandad