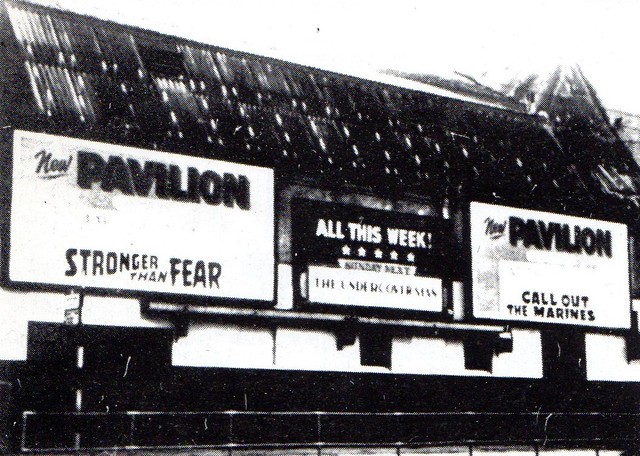 Located in the east London district of Poplar. The Electric Kinema Theatre opened in December 1912, the architect was Frank E. Harris of the Mile End Road. The structure was wooden with a corrugated iron roof and it was operated by Sara, Kitzy and Marks Rothstein. Due to them opening another Electric Theatre in 1913, slightly closer to Canning Town, the owners of the Electric Kinema Theatre, added the suffix ‘Ironbridge’ to the name of this theatre to avoid confusion.

It was re-built in stone and brick, to the designs of architect J.M.H. Gladwell, with interior plaster decorations by Messrs Boekbinder of Kentish Town. It re-opened on 3rd November 1914 as the Poplar Pavilion, now with 900 seats including a balcony.

In 1928, it was rebuilt again, the architect was A.H. Jones of Victoria Station House and now the auditorium ran parallel to the South side of East India Dock Road, with the entrance at the eastern end, the screen and stage at the Western end. It had a seating capacity of 1,318, a stage 12 feet deep and 28 feet wide. A Christie 2Manual/6Rank organ was installed (replacing an earlier ‘straight’ organ). From around 1936, it was taken over by the East End operator George Smart. Pictures and variety formed the programming, which changed twice weekly. It was re-modeled in early 1941 by architect George Coles.

Towards the end of World War II, the cinema was badly damaged by a V2 Rocket in March 1945 and was temporary closed. It was repaired and redecorated and was given the name New Pavilion Cinema from around 1946. The New Pavilion Cinema was closed on 29th October 1949 with Tyrone Power in “The Sun Comes Up” and “Sweet Miss”. The reason for closure was mainly due to the loss of patrons due to the heavy bombing the east London area had suffered during the war.

The cinema was soon purchased by the Essoldo Cinemas chain, based in Newcastle upon Tyne, but operated by New Pavilion (Poplar) Ltd. It re-opened in December 1949 with William Holden in “Streets of Larado” and Brenda Joyce in “Shaggy”. The cinema was equipped with CinemaScope in 1954, the first cinema in the East End to be equipped with this process, which offered a 24 feet wide screen, set in a 30 feet wide proscenium, with a reduced seating capacity of 1,212.

Essoldo took full control in January 1956. It was re-named Essoldo from 15th July 1956. The Essoldo closed on 1st October 1966 with the double-bill (X) Certificate horror programme; Michael Landon in "I Was a Teenage Werewolf" and Peter Graves in "It Conquered the World".

It was converted into a bingo club and this operated until the late 1980’s, closing as a Ladbroke Bingo Club. In 1989 it was offered for sale, but no offers came along and it was demolished in 1990 and housing was built on the site.