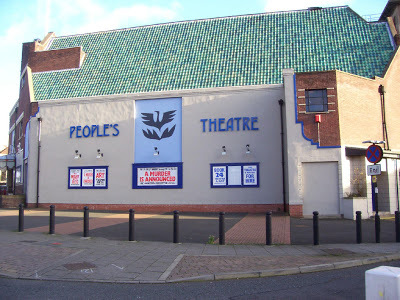 Located in the Heaton district, east of the centre of Newcastle upon Tyne. The Lyric Cinema opened on 6th January 1936 with Shirley Temple in "The Little Colonel". The building has an imposing corner location and has two entrances, above which is a green pantile mansard roof. Seating was provided in stalls and circle, with a 38 feet proscenium opening, a 10 feet deep stage and added facilities of a cafe and a free car park.

It was designed by Newcastle architectural firm Marshall & Tweedy, with internal decorations by R.J. Richardson. Throughout its life it was an independently operated cinema, the initial operators being Tyne Picture Houses Ltd. of Wallsend.

The Lyric Cinema was closed as a cinema on 20th June 1959 with Alec Guinness in “The Horse’s Mouth”. It was a victim of the introduction of Tyne-Tees commercial television which began broadcasting in the area in January 1959.

However, the Lyric building was put to good use as it was purchased by the People’s Theatre, which had been established in 1911. It became an arts centre and opened in 1962 with a production of George Bernard Shaw’s “Man and Superman”. Today it hosts local amateur productions as well as touring productions. It is also home to the Young People’s Theatre, which was established in 1963. In 1982, the main auditorium was rebuilt, eliminating the circle to give two spaces on one level seating 510 and 280. There is an 85 seat Studio Theatre which was built at the back of the main auditorium in 1981 and two rehearsal rooms.