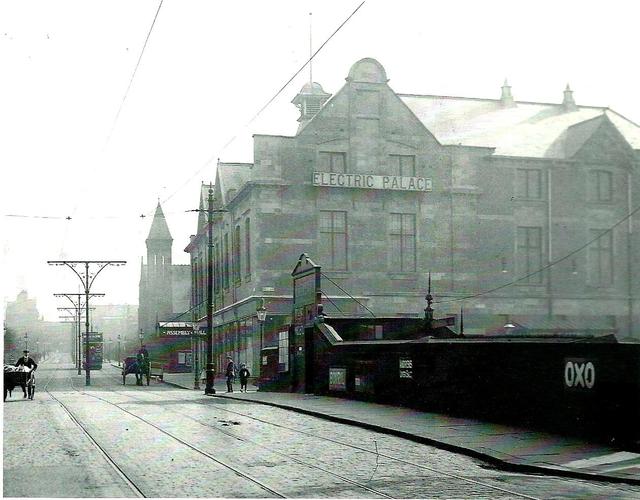 In the Heaton district of Newcastle upon Tyne, in November 1909, a local newspaper reported that a “large house near to Heaton Station, known locally as ‘Temple’s Folly’, has been purchased by a syndicate, and is to be adapted to the purposes of assembly and recreation rooms.”

Presumably this is the building that became the Heaton Electric Palace. Along with a billiard hall and a roller-skating rink (that was soon converted into a ballroom), it was owned by the Heaton Assembly Hall Company.

At first, the film shows were accompanied by “refined and high-class variety”, but films soon took over full-time. There was an unusually large orchestra, of eight, under W. G. Foggin. A café had been added by 1921.

Talkies arrived on 9th December 1930 with “Movietone Follies”. Advertising in the 1930’s described the cinema as “homely and select”.

In September 1937 the cinema closed for a week for modernisation and redecoration, re-opening with “Three Smart Girls”, starring Deanna Durbin.

In 1946 it was acquired by C.J. Shepherd. From the late-1940’s until 1960 special shows were presented for elderly people, organised by the East End Old People’s Treat Committee.

The whole building became an attractive complex of bingo hall (in the unrecognisable former cinema), bars and nightclub.

By October 2014, Heaton Bingo no longer required such a large building. At the same time, the Elim Pentecostal Church, also on Heaton Road, needed a new site to accommodate its growing congregation and projects like food and clothing banks.

The bingo hall’s owner suggested a swap, with Elim Pentecostal paying the difference. Despite some members of the congregation being unhappy about bingo moving into their church, this went ahead, and the former Heaton Electric Palace is now home to the Elim Church.