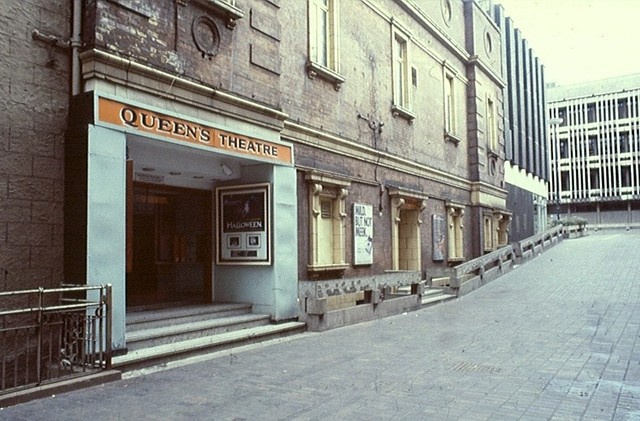 The building was designed by Newcastle architects Marshall & Tweedy and there were 1,047 seats in the stalls and 366 in the small circle. There were also six private boxes at circle level along each of the two side walls. There was a square proscenium arch and rounded barrel ceiling. Initially an independent cinema, it was taken over by George Black in March 1920 and a Vincent 3Manual 29Ranks straight organ was installed.

In 1928, George Black sold the Queen’s Hall to General Theatres Corporation and it was closed for four weeks during July and August 1928 for redecoration. It was soon under the operations of Gaumont British Theatres when they took over General Theatre Corporation, and it became the premier Gaumont operated theatre in the city.

In 1957, the organ was sold and removed from the cinema and a new wide screen was erected in front of the old proscenium opening. The Queen’s Hall began screening Roadshow films. First came "Around the World in 80 Days" which ran for 3 months. "The Ten Commandments" ran for 4 months in May to August 1958. The cinema was then equipped to screen Todd-AO and it opened with "South Pacific" which ran for 81 weeks from September 1958. The Queen’s Hall was closed on 15th June 1963, to be converted into a Cinerama Theatre. The building was totally gutted and a new roof installed. Seating was reduced to 972 (613 stalls and 359 circle) in the new luxury cinema, which had drapes on the wall and a huge curved screen.

The Queen’s Cinerama Theatre opened on 9th November 1963 with "How the West Was Won", projected via a 3-projector system. From 23rd May 1964 "Cinerama Holiday" played and this was followed by "The Wonderful World of the Brothers Grimm". The cinema then went on to screen films in 70mm Cinerama on a single projector "Its A Mad, Mad, Mad, Mad World, which was followed by a 140 weeks run of “The Sound of Music” from 18th April 1965.

The Queen’s Cinerama Theatre closed on 16th February 1980 with Jack Nicholson in “One Flew Over the Cuckoo’s Nest”. It remained empty and unused and was demolished in February 1983. A shopping centre was built on the site, which was unsuccessful and it is now converted into gambling areas and restaurants.

I would just like to second the comments made by N Thomson. As a youngster I saw all the original 3 strip cinerama films and I was so impressed that I made a point of travelling over from Sunderland every time a new widescreen film came out. 2001 a space oddesy was fantastic albeit in 70 mm. I think the sound quality in this theatre was second to none and blows the socks off the latest compressed gimmicky sound you get these days in the “cubicles”. Cinerama still lives if you can make a trip to Bradford media museum. They are shown on the first saturday of each month. Fill your nostalgia boots folks. Queens Theatre, forever in my heart!

Must agree about the sound quality.
I remember ducking when the sound of shellfire came from behind me while watching ‘Ryan’s Daughter’ in 1970.

I first saw “Lord Jim” and “Fall of the Roman Empire” at The Queen’s and was spellbound by the experience. I became a cinema projectionist, but not in such a grand cinema. The present generation has no idea what has been lost and what they are missing.I would love to see the Cresta Run sequence from “Cinerama Holiday” again. If only it could be at “The Queen’s” in Newcastle!

My first visit to this wonderful cinema was a school trip to see a film about the Bolshoi Ballet which would have been 1955 ish. I then saw many shows in the years after in all it’s formats. Presentation always impressed me in those days, not any more! The multiplex way seems to be just slap it on the screen!

My favourite movie being the 1969 War Blockbuster:– “Where Eagles Dare” and I remember seeing this at the Queens in 1974 just before I began my career here, all its glory on the 70mm giant screen… never forget it… nothing ever compares to this presentation….

I have the 2 Philip’s DP70 projectors from the Queens. I have spent the last 8 years restoring them to full working order. I would like to contact any of the projectionist from the Queen.

Hi there Mr BTH, Im probably one of the last projectionists from the Queens Cinerama Newcastle, Im thrilled to hear the original projectors are still around and in working condition.

Whilst the Queen’s is probably most famously associated with ‘The Sound of Music’ which ran for 140 weeks from 18th April 1965, it was also the venue where, 5 years earlier in 1960, Hitchcock’s biggest commercial success, ‘Psycho’ had an extended run (photo uploaded).