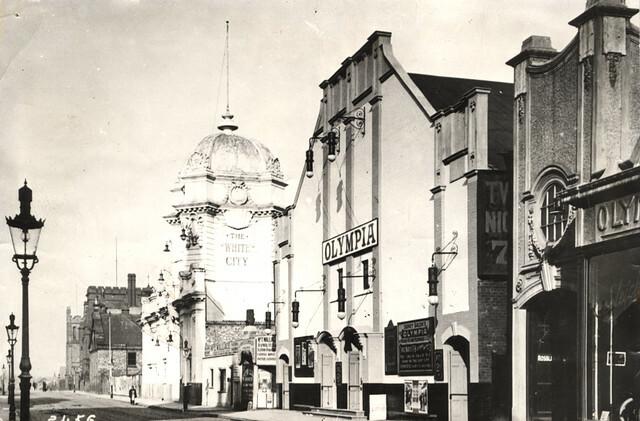 In Newcastle upon Tyne city centre, the Olympia Cinema opened on 20th December 1909. It was built on the site of the Hippodrome, a very basic building that had started life as Ginnett’s Circus in February 1890 (it has its own page on Cinema Treasures) - and not, so far as I can determine, the site of an earlier hall called the Olympia which was, rather confusingly, also on Northumberland Road. (This had opened in December 1893 as a general purpose hall. Bioscope shows were frequently presented, including Charles Urban’s ‘Urbanora’ in 1905. This Olympia was destroyed by fire on 2nd December 1907.)

This ‘new’ 1,600-seat Olympia Cinema appears to have been equally basic, with the body of the hall being of corrugated iron (later replaced by asbestos), as was the roof - not ideal during rain storms! It was designed by architect J. Shaw. Interior decorations were by W.T. Gibson based in Gosport & the Frediani Brothers.

At the opening, music was provided by the Lovaine Quartette. Variety acts early in 1910 included “Ada Coffy, a coloured lady” and “Little Violette”, a female impersonator.

During World War I the Olympia Cinema went over to continuous performances, liberally dosed with comedies and serials. Lindon Travers died in 1918 and the programme became even more ‘basic’. Although ‘talkies’ arrived on 25th November 1929, with “The Broadway Melody”, starring Bessie Love, the Olympia Cinema often only got the best releases after their suburban showings. Seating was by now 1,100 (pit 400, stalls 352, circle 348).

Union Cinemas chain took over the Olympia Cinema in 1936 and they were taken over in October 1937 by Associated British Cinemas(ABC). In September 1960 closure was announced. The site was under a tenancy agreement from the city council, renewable every six months, and there seems to have been some question whether it would be renewed. Not wishing to make improvements if the tenancy was terminated, ABC decided to close the Olympia Cinema. It ended its days on 8th April 1961 with “The Millionairess” starring Peter Sellers.

The building was used as a warehouse by the adjacent British Home Stores before being demolished in 1971.

This, in the early 1950’s, was the first full Manager’s post for Norman Cully, my boss at ABC, Sunderland. He transferred to the Coliseum, Whitley Bay from the Olympia where he spent quite a few years before becoming Manager of the ABC Ritz, Sunderland, ABC’s most important theatre in the North East after the Haymarket, Newcastle.

Please see my comment in the photos section (image 3).