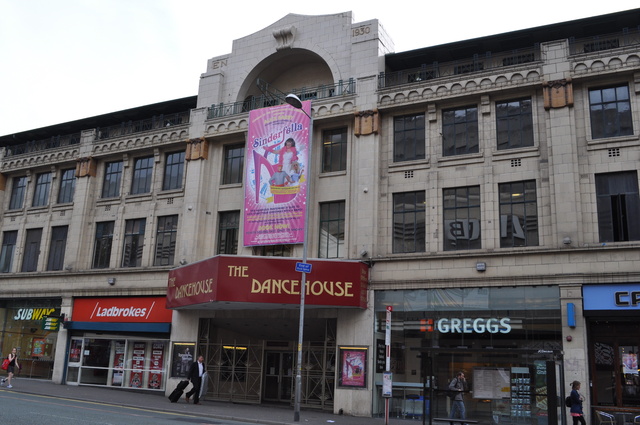 The Dancehouse Theatre orignally opened as the Twin Regal Kinemas on 20th September 1930. The cinemas, which had separate entrances and foyers, were on the second floor and shared a single projection room. Neither had a balcony and each seated 800.

Although it’s common place now, these two cinemas often presented the same film albeit at different times. Each had a barrel vaulted ceiling and elaborate Art Deco plasterwork down the side walls depicting folds of cloth.

In 1960, they were bought by the Star Cinemas group and renamed Romulus and Remus which lasted just two years before they became known as Studios 1 & 2.

In 1972 sub-division took place and they became Studios 1-5. Ian Grundy recalls, “I believe that only the former Studio 1 was split leaving Studio 2 intact – but this is unconfirmed.”

Star Cinemas chain was bought by the Cannon Group late in 1985 and, as happened elsewhere in the country, they were quickly closed, the last films being screened September 25, 1986.

They were left shuttered until Manchester gained the European City of Drama in 1992 and the need for more middle scale live theater space identified the closed Studios as ideal for conversion.

So the Dancehouse Theatre was born using one of the auditoria as the theater – and very attractive it is too in its restored state, whilst the other is now rehearsal and studio space for the Northern Ballet School which now shares the premises.

Here, too, the surviving plasterwork has been restored. The former Twin Regal Kinemas are a Grade II Listed building.

I remember being at a meeting with an executive of AMC of America. When He told me that they had the first 2 screen cinema in the World… I had great pleasure in asking him. What was Regal Mancester doing in the early 1930’s… being a twin cinema in the UK.. :o) giving my best smile…

I waorked at the Twins in the670’s There were 2 projection rooms back to back the projctors were Kalee model 11 with GK “President Arcs” and Westex sound. Acommon fault was that the psssenger lift from the Foyez used to get jammed and one of us used to have to get down in the mechanism and free it up usually when the Cinema was very busy!

I worked at the Studio’s from 1970 to 1973. The Westar projectors with Westrex 2002 sound heads were installed in 1958 with 3D adaptations and BTH Xenon, later came the Type D Projectormatic. In 1972 Studio was closed and converted in to Studios 2, 3 and 4. Studio 5 was located 2 floors below the projection room in what was the office of North West Entertainments Ltd. A 5th Westar was brought in for Studio 3 and the 4 original projectors were used for the rest. Westrex 5009 amplifiers were used in Studios 2, 3 and 4 the original Westrex 2042 amplifiers being used in Studio’s 1 and 5. The Chief projectionist was Ken Kay and his ghost is thought to still haunt the place.

This theatre was the Worlds first multiplex(although there a cinema in Cairo, Egypt(name unknown?) showing 2 different films on two different screens in the same auditorium(unique?)).

I only ever knew it as The Regal Twins, and was taken there often as a child and into my youth. No, Ken Roe, both houses had similar fit-out. The prosceniums were framed by a back-lit lattice-work and my over-riding memory is of Duane Eddy being played pre-show and before and after the interval. I have visited the surviving auditorium, for shows at The Dancehouse. The stage has been much extended, as can be seen in Ian Grundy’s excellent photos on Flikr. The whole building is operated by The Northern Ballet School, who use the auditorium as their personal performance space and also hire it out to other dance schools in the area. Full photos of the revamped interior are available on the Northern Ballet School website: http://www.northernballetschool.co.uk/en/welcome

A much more detailed history of the building, along with some wonderful photos, is available here: https://www.visitmanchester.com/ideas-and-inspiration/blog/read/2019/10/delving-into-the-history-of-the-dancehouse-manchester-discover-more-about-the-past-of-this-impressive-building-on-oxford-road-b996