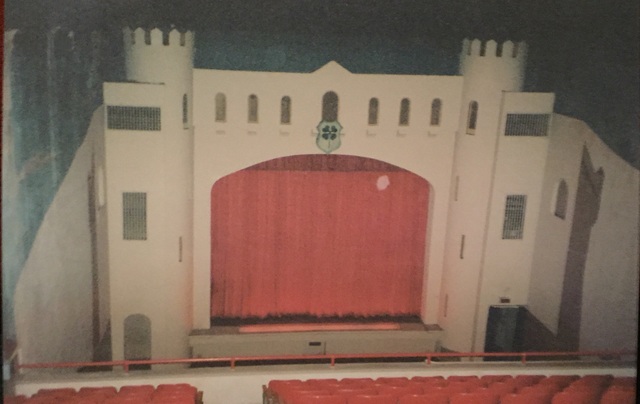 This little theatre is a gem.

Constructed as an Atmospheric style theatre, in the style of a medieval Spanish castle, the building was designed by the Albuquerque, New Mexico, architectural firm George Williamson, Inc. It was built for the partnership of Dr. L.A. Hubbard and Thomas F. Murphy. The cost of the theatre was reported to have been approximately $100,000. Construction began on July 15, 1929 and was completed for its grand opening on April 20, 1930. The inaugural movie was a Warner Brothers sound picture in natural color; “Song of the West” starring John Boles and Joe E. Brown.

The exterior facade has turrets, battlements and other appropriate decorations befitting a Spanish castle in the Gothic style of architecture. There are two storefronts located on each side of the main entrance to the theatre. The auditorium and balcony contained a total of approximately 520 seats.

The Spanish castle motif was reflected throughout the interior of the building. Surrounding the auditorium’s movie screen it resembles the theatre’s facade of an ancient castle. The audience were made to feel as if they were seated in a courtyard with the side-walls painted in a floral design, resemble vines growing over an old Spanish structure. The murals and designs were painted by the noted artist J. Charles Scnoor, grandson of Baron Jacob Carlzevalt Von Schnoor who was knighted by King Ludwig of Bavaria for his work in illustrating the German bible.

The Raton Evening Gazette for April 18, 1930, reported that the ceiling was painted in a “….soft deep blue of the southern sky, studded with many twinkling stars, and here and there, (clouds) floating leisurely across the arched expanse are so real that we can hardly believe we are surrounded by four walls and a roof.” The side-wall murals were painted over when some remodeling was done by architectural firm Brittelle, Ginner & Neuner) and the ceiling’s stars and clouds also disappeared. These changes were the result of a fire and explosion in fall of 1951.

In April 2008, three Raton couples, Traci and Ted Kemp, Kerry and Kristie Medina and Donna and Neil Emiro purchased the theatre. It is now open and showing feature movies and special events.

Will someone please load this “little beauty” onto a trailer and ship it up to the greater Salem area of Oregon. I’d consider my guardian angel had finally made my dream come true!

Well hate to disappoint Simon but the theater is now reopened as of the 23rd of may. I currently it’s projectionist and must say having a fun time doing it too.

Big news at El Raton! We have been continuously improving various aspects of the theatre and building. Both of the storefronts are undergoing renovation, with the south storefront now about 95% complete, and the north storefront about 40% complete. New carpet has been purchased for the interior, and will be installed early November.

The big news is in the projection booth. The 1952 Brenkert BX-60 projector and associated 35mm equipment has been retired, and replaced with a state of the art Dolby Digital 3D system! Sound has also been upgraded. Everything is crisp, clear and beautiful! Come check it out!

Just so future photographers know, if you stop by the theatre, and we are not open, just knock on the door. We may be inside working, and would be glad to give you a short tour of the inside. And yes, we do allow photographs of the inside, too :)

Latest News: El Raton Theatre has completed another round of upgrades, now featuring not only Dolby Digital and Dolby 3D projection, but now we offer Dolby 7.1 Surround Sound, as well! This makes El Raton Theatre the only theatre to offer all three of these technologies within 450 miles! Come check us out!

New pictures of the El Raton loaded to the Photo section.

Some old pictures, but we do appreciate seeing them!

Boxoffice, Nov. 3, 1951: “An explosion and fire thought to have been caused by spontaneous combustion in the coal bin caused $100,000 damages to the El Raton at Raton, N. M. The house, belonging to Hubbard & Murphy, Inc., suffered a burned-out stage and auditorium. Although the lobby was practically undamaged, the force of the explosion blew a door across the street. The walls and the ceiling were also undamaged. This was the A-house and the policy is being moved over to the Schuler until the 684-seat El Raton can be rebuilt. The fire occurred at 10:40 in the morning so no one was in the theatre, and it so happend that no one was passing when the door was blown off the hinges.”