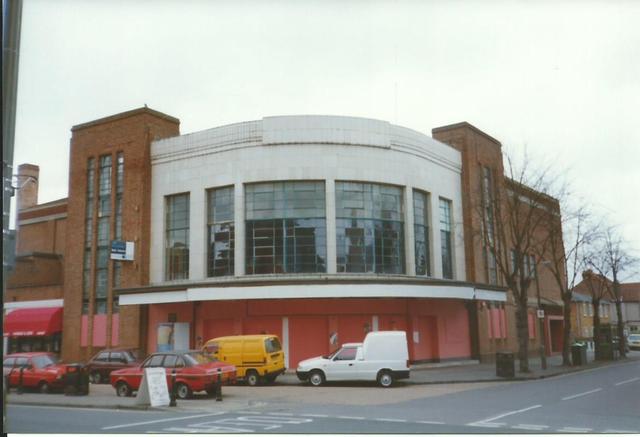 Located in Ashford, Surrey(formerly Middlesex), near to Staines-upon-Thames, just South of Heathrow Airport, in the West of Greater London.

The Astoria Cinema was opened on 30th October 1939. It was built for and operated by an independent operator named Perrin & Perrin.

Positioned on a corner site, the white stone entrance had a gentle curve and had six windows located above the canopy. Each side of the entrance were brick tower features. Inside the auditorium there was a 40 feet wide proscenium, with a stage that was 12 feet deep. The Astoria Cinema was equipped with a Compton 2Manual Theatrone (electronic) organ which was opened by Edgar Peto. He was resident organist here, when he was tragically killed by a lorry while on his way home from the Astoria Cinema in June 1940. The Astoria Cinema also boasted a cafe and dancehall for the convenience of its patrons and general public.

It was taken over by the Shipman & King circuit in 1948. Amalgamated with EMI/ABC, it was closed on 17th December 1975 with Gene Wilder in "Young Frankenstein" and Barry Newman in "Vanishing Point".

The building was converted into a Mecca Bingo Club and retained all the charm of a typical 1930’s cinema. Mecca Bingo closed the building in 2001 and it was demolished in April/May 2002, to build a home for the elderly named Perrin Court.

I visited here with the CTA, must dig my pix out and post them.

Visiting the hospital in Ashford, KENT, I noticed two framed cinema photos in the restaurant. One is of the Odeon, but the other of the Astoria is in the wrong town! I hoped to upload but CT is patchy on accepting photos.

The framed photo in wrong hospital is now displaying.

The Kent MOMI museum in Deal has the 1939 opening programme