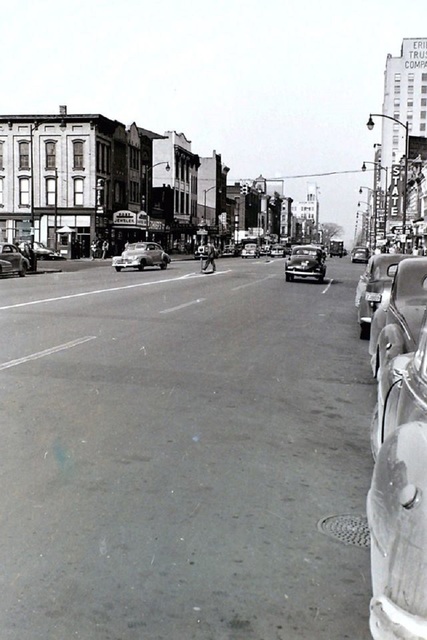 Originally opened as the Nixon Theatre by 1918. It was later renamed Rialto Theatre. By 1941 it had been renamed State Theatre, and operated thru to 1950 and beyond…

The State was originally the Rialto and was demolished years ago. In the early to middle 50’s, after being closed for some time, it was reopened but failed and was dark until it was taken down. For a time, you could see part of the auditorium sidewall on the Commerce building next to it as they shared a common wall. That building is also gone.

This theater after it was closed was reopened as the State Tavern and operated for several years. It went out of business and was torn down after that.

This 1918 list of Erie’s theaters has a Nixon Theatre listed at 1115 State Street. This was surely one of Samuel F. Nixon’s theaters, and thus probably fairly good sized, like the State. As the Nixon probably covered at least two lots, 1115 and 1117, I suspect that it was the same house that later became the Rialto and then the State.