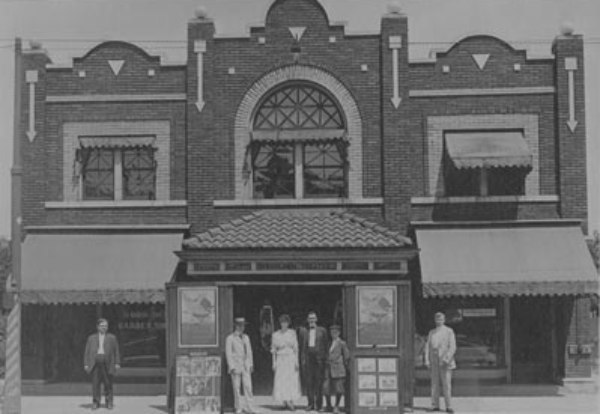 The Woodlawn Theatre opened on May 16, 1914 with seating listed at 367. It was later operated by Premier Theatres.

I’m not sure that any part of the Woodlawn Theatre is still standing as part of the church now on its site. Part of the north sidewall of the building looks like it could be fairly old, and that section of the building has a gabled roof, characteristic of theaters built during the 1910s and early 1920s, but most of the building is of unmistakably modern construction.

The Woodlawn was definitely in operation by the early 1920s. A page at the Willard Library dates the photo seen at Chuck’s link as c. 1920. It’s obvious from the outfits the people in the photo are wearing, too. The ankle-length dress on the woman could have dated from the late 1910s.

It now looks as though the theater was not on the church site after all. This web page at Historic Evansville says that the Woodlawn Theatre was demolished in 1963, after closing in 1957. At the “View all Images” link there is an aerial view from 1947, and the enlarged version of it includes the Woodlawn Theatre, outlined at lower left. It does look like the theater was too far north to have been under what is now the church’s footprint. Also, it had a flat roof, unlike the northern section of the church that I thought might have been what was left of the theater.

The site says that a branch of Hardee’s is on the site of the Woodlawn Theatre. Unfortunately, I updated Street View with a view of the church before I found the Historic Evansville page. Pan the view left to see the Hardee’s. The theater was most likely sited on what is now the parking lot between Hardee’s and the church.

Although it is not listed in the 1914-1915 American Motion Picture Directory, the Woodlawn must date from not long after that time. An advertisement for it in the April 16, 1919 issue of the Evansville Press boasts of its “…years of success as a neighborhood theater.” Also, none of the theater building was incorporated into the modern church building. According to the Evansville History web site, the house was closed in 1957 and demolished in 1963.

The Woodlawn Theatre was one of nine Indiana houses for which National Theatre Supply had recently installed a Walker Silver Sheet screen, according to The Film Daily of January 18, 1936.

The Woodlawn Theatre launched on May 16, 1914 originally with 367 seats. Prior to the address renumbering of 1925, the theatre was located at 2211-2213 Main Street just off of the corner of Oregon Street. It remained there until closing although it was renumbered as 1011-1013 Main Street.