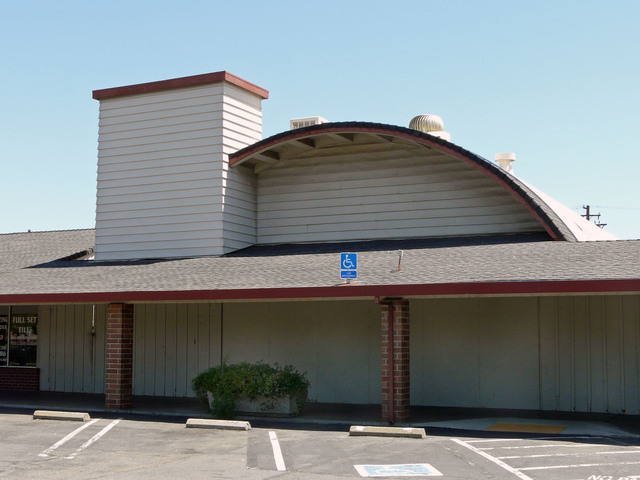 The Manor Theatre opened on October 15, 1948 with June Haver in “Scudda Hoo! Scudda Hay!”. It was located in the Fruitridge Shopping Center at Stockton Boulevards and Fruitridge Road, in Sacramento’s Fruitridge Manor district. The theatre was set back from the street behind a parking lot. Although the auditorium was in a quonset hut building, the front of the theatre was designed in a western ranch style, to match the other buildings in the center.

In lieu of a marquee, the Manor Theatre had a two-sided attraction board rising from a brick planter that extended from the front of the building. The entrance doors opened onto an extension of the shopping center’s covered walkway, which was supported by round, wooden columns. Rustic features of the interior included lobby paneling of combed plywood, painted antique green with gold highlights.

The Manor Theatre was designed by Sacramento architect Herbert E. Goodpastor, who had also designed the Colonial Theatre a couple of miles north on Stockton Boulevard.

In 2017 the building is in use as a FedEx shipping center.

I remember this place. As a kid I remember driving past it often. I always wanted to go in, but of course they weren’t showing Disney films at that point. I love the style of the exterior—very California.

i lived in Sacramento for a breif time in the mid 90s and i remember going to rent movies right next door to were this Theater used to be at video studio 6 . i iremember looking at the building and wondering if there was a theater in this building . and i finally seen that it was . havn’t been to Sacramento in years just wondering if the video store is still there .

Does anyone know if this building still stands today and what business occupies it? I haven’t been to the area in 15 years.

This is from BUSINESS JOURNAL in 1998, but I don’t think anything came of it for this theatre:

Ten years ago, Warren Ilsohn and Jean Mulleian, the owners of the Fruitridge Shopping Center on Stockton Boulevard, were forced to close the aging Manor Theatre.

The theater was built in the 1940s and badly needed renovation. But lenders wouldn’t touch it. “We got numerous excuses,” Ilsohn said. “Some said it was the wrong area. They gave us the runaround.”

Now the Manor Theatre and other properties like it in the Stockton Boulevard Redevelopment Area may get a new lease on life.

Bank of America has launched a two-year pilot program to put its considerable heft behind a plan to build up the neighborhood. The state’s largest bank is committing itself to reaching out to businesses, property owners and residents who need low-interest loans to make improvements and build equity.

This website lists the theatre at
5677 Stockton Blvd and a recent photo shown there shows a nondescript building standing there, but you can see it’s the Manor Theatre—waiting to be lived in again.

Dam…. the Manor Theater was the hang out from 1965 through 1969! Monte Pitts and I would load up on the Jade East cologne and go hunting for the ladies….hahaaa!

Dang, I can’t believe that more people haven’t commented about the good times they had when they were younger and seeing movies at this theater. For us guys attending Joseph Bonnheim elementary school, this was the place to hookup with your 5th or 6th grade lady friend…..Ha-ha!!!!! To be a kid again…..wouldn’t that be great!!!!!