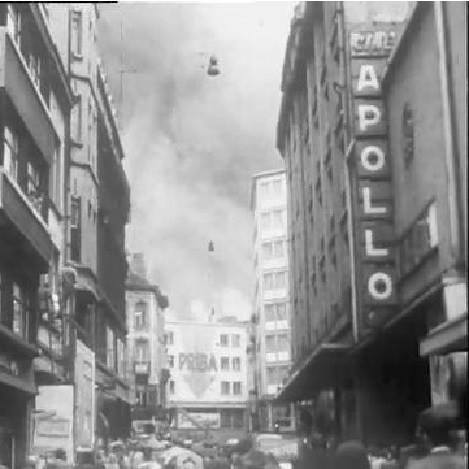 This cinema in Bruxelles has had many changes of name. Located just nearby the Varieties in the Rue de Malines, it operated first as a newsreel cinema in 1935 as the Cineum. It became Cinemax until 1957, then Rubens Cinema with German movies. It was quite popular at this time due to the “Sissi” series, The most interesting period came in 1959 when it became Apollo Cinema specializing in horror movies, due to the success of the British Hammer film studios productions. The first film was the Mexican film “El Vampiro”, the movie which influenced Christopher Lee in the Hammer films Dracula series. “Tarantula” (with a young Clint Eastwood as an aviator was already shown there when it was called Cinemax then revived at the Apollo Cinema.

In 1972, it was taken over by the Pathe circuit and became Concorde Pathe, then Plaza 2. it was the second screen of the Plaza.

After a restoration, it became the Acropole Centre in the 1980’s, one of the last films shown there was “Raiders of the Lost Ark”, it closed in 1985 and is now part of the Hotel Plaza.