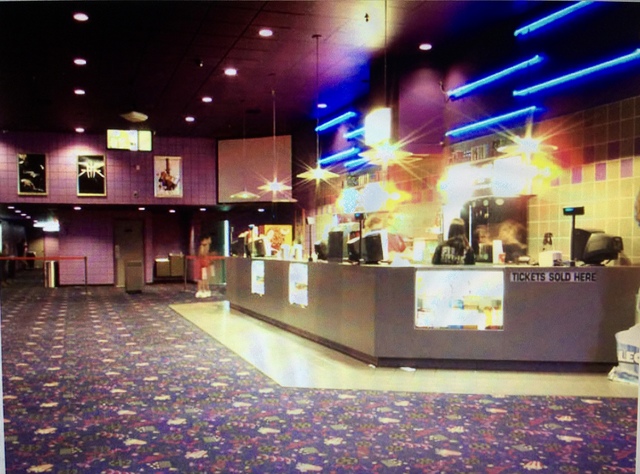 The Kipling 6 opened as the Kipling Plaza 6 and later Movie One. It is now operated by Elvis Cinemas as a sub-run discount house.

It opened as Kipling Place 6, actually. It was built by General Cinemas during the great cinderblock fetish of the late 70’s/early 80’s I believe. Cinderblocks are everywhere in this theater, the lobby walls, the auditorium walls, and even holding up the “sound rack” for auditorium #3’s sound equipment. Mann Theatres bought the place and it continues to run as a first run multiplex until it was purchased by Movie One right before the Bowles Crossing 12 theater opened down the street. Then it was sold to Silver Cinemas and now it is Elvis.

Someone made a video back in the 90’s of this theater. I’m guessing he worked there. :)

GENERAL CINEMA OPEN THIS THEATER LONG BEFORE ITS TIME BUT IT IS STILL OPEN TO THIS DAY, IN A SPLIT CENTER VERY NICE AREA LATER MANN THEATER TOOK IT OVER THEN MOVIE ONE AND ELVIS THEY DID FINE JOB KEEP IT OR DECORATING UP TO DATE.

Silver Cinemas operated this also as a sub-run discount house until May 1, 2000 when it shut down 17 locations including the Kipling location as well as the Aurora Super Saver and Arvada.