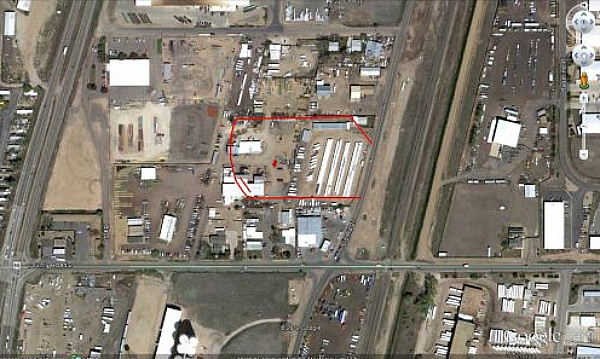 Correction: Address should be 111 County Road 27.

Based on the aerial photos, the Kar-Vu opened after 1949 and was completely replaced by 1991. Let’s check the paper trail.

The June 24, 1953 issue of the Exhibitor reported, “Other Atlas Theatres changes included the promotion of Mel Madero from manager, Kar-Vu Drive-In, Brighton, Colo., to city manager at Salida, Colo., where he succeeds Warren Butler, resigned.”

The new manager must not have worked out, given the news in the July 22, 1953 issue of the Exhibitor: “Atlas Theatres disposed of its interests in the Kar-Vu Drive-In, Brighton, Colo., to its partner, Elden Menagh, who also owns the nearby Star, Fort Lupton, Colo.”

In Feb. 1976, the Greeley Tribune (newspaper of the Weld County seat) reported that Kar-Vu Drive-In Theatre, Inc., had sold $86,000 of real estate to Rollande L. Prevost.

The 1952 Theatre Catalog showed the Kar-Vu with a capacity of 350, owner Dave Davis of the Atlas Circuit. For the 1955-56 edition, the owner was Sam Feinstein.

In case you need a reminder of the fallibility of reports in Boxoffice magazine, not only did the writer of this Feb. 16, 1976 note misspell the drive-in’s name, he appears to have mistaken a twin indoor theater for a drive-in: “BRIGHTON, COLO. – Aldage R. Prevost, who bought the nearby Cinema Twin a year ago, has taken over the Kar-Vue, both drive-ins from Robert Miracle. The Cinema Twin has spaces for 260 cars on each side, while the Kar-Vue has room for 300 cars.”

Boxoffice, May 1981: “One of the oldest drive in theatres in the Denver metropolitan area, the Kar-Vu Drive In located in Brighton, Colorado, has ceased operation and is being dismantled.”

On Jan. 21, it listed all drive-ins, including projects, and had both the “Paul Rothman and Elden Menagh, 325” and the “Atlas Theatres, 400” for Brighton.

The Kar-Vu held its Grand Opening on April 8, 1950, showing Glenn Ford in “The Man From Colorado” and Abbott and Costello in “Keep ‘em Flying,” per its ads in the Brighton Blade.