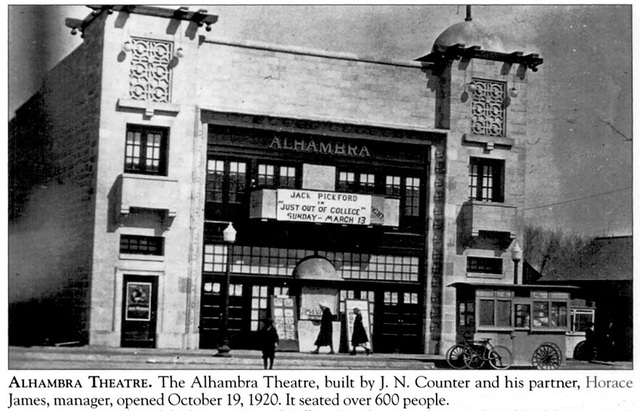 In 1920, J.N. Counter and partner Horace James announced they were going to build a movie theater. It would be located at 297 Bridge Street next to the Counter Lumber yard and between the Orlando Hotel (which burned in 1971), and would cost $30,000. The theater was called the Alhambra Theater. The exterior of the building was to be similar to the Orpheum Theater in Denver.

The Alhambra was a palace of the Moorish kings at Granada, Spain. Perhaps, the owners thought when the building was completed it looked similar to the palace in Spain. Or perhaps, having cost $40,000 when completed, they thought the building should have been a palace. It was certainly the most unusual building in Brighton at that time. The Alhambra Theater was opened on October 19, 1920.

In 1923, the theater name was changed to Rialto Theater. On March 29th, 1923 a $12,350 Wurlitzer Hope-Jones organ was installed. An electric sign was erected on the street. The theater seated 600 and was open 7 days per week. The Rialto Theater showed 6 of the 10 best movies of 1934. They were: “Barrett’s of Wimpole Street”, “House of Rothchild”, “Little Women”, “The Thin Man”, “Viva Villa” and “Dinner at Eight”. They missed : “It Happened One Night”, “One Night of Love”, “Count of Monte Cristo” and “Berkley Square”.

Architects Moorman and Twogood remodeled the theater in 1935. On December 21, 1935, and again the name changed – this time to the Rex Theater. The movie theater was successful for many years and lots of Brightonians remember watching their favorite movies there such as “Dumbo”. They held a family night during the week and they screened serials on Saturdays that children loved. During World War II, the Rex Theater held a promotion, and instead of purchasing admission tickets, you purchased a war bond for $18.75 that at maturity was worth $25.

Fire destroyed the Rex Theater on June 11, 1954. While the fire was burning, an officer of the Atlas Corp. (theater owners) was called to the scene. David Davis authorized the fire department to cave in a wall of the theater. After the fire, this same gentleman authorized certain parties to remove debris and take as part payment all salvageable items. Shelby Doty, who was manager of the theater, lived on the second floor with his family. They lost everything except some clothing they were able to take with them in their escape.

Later Boxoffice notes tell this story: Philipsen moved over to manage the Kar-Vu Drive-In when it opened in April 1950, apparently replaced at the Rex by P. R. Ruddick. When the army recalled Ruddick later that year, Philipsen temporarily returned during the winter of 1950-51. In May 1951, Atlas brought in T. V. Austin from Salt Lake City to manage the Rex, freeing Philipsen to concentrate on the Kar-Vu.